Bette Midler looked like a housewife who might be preoccupied with things at home. Her hair .fell in a single braid, and the bangs may have been geled. She was wearing loud plaid pants and matching oversize sweat shirt. She was also wearing braces on her teeth.

“They were starting to climb over each other,” she said. “The dentist is putting them-back in their place.” â€¢ â€¢. ” –

She’s done a new film. It’s called “Outrageous Fortune.” It’s a comedy, and Shelley Long is her co-star. They play characters who are in love with the same guy, a bounder who uses both women to his own nefarious advantage. Midler was pregnant when she did the film. Now, she and husband Harry Kipper, a commodities trader, are the parents of a girl named Sophie.

It was said (by columnists) that the Kippers named their child after Sophie Tucker, the legendary cabaret’ stager, and Midler smiled when someone mentioned this. “No,” she said, “we named her after an impoverished German princess:” 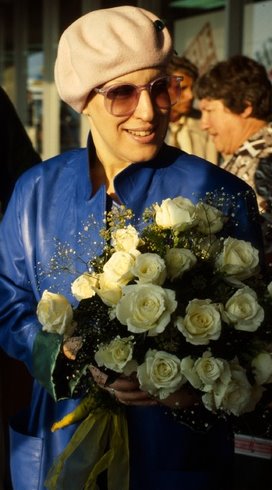 That wasn’t true either. The queen of camp was kidding. “Actually,” she said, “we just wanted a name that was more European than American. We picked Lulu first, then we thought of giving her a Hawaiian name, but we finally settled on Sophie.”

During filming, the currently fashionable oversize clothing took care of hiding the pregnancy. It didn’t take care of the physical activity, and there is a lot of that in the film. What Midler didn’t do, doubles did. “I-had tremendous reservation, but the doctor said that all I had to do was stay cool, eat right and do no drinking, .drugs or smoking,” said Midler, who added that smoking was no problem because she smokes “about one cigarette a month.”

She is 41 now. She had her first child a little late in life, but she loves motherhood. “It’s so rewarding,” she said. “It’s tiring, too. I’m a working mother. I’m not really working that hard, but it is a lot of work.

It’s nothing like what I thought it was going to be. It’s those 2 o’clock feedings. I have help, but I found I was very tired. For the first time in my life, I knew what my mother went through.”

Knowing what she does, would she have another child?

We had seen her new film, and one of the reporters asked how she liked doing the sex scene. “What sex scene?,” she said.

The one where you go to the guy’s apartment, and the next thing we see are your and his legs extending beyond the rear of the sofa. She looked surprised. “I don’tknow anything about that,” she said. “I’ll tell you all I did. I went to his apartment, threw my arms around him, and then the two of us went down the stairs. Those are not my legs. I ‘m
a b s o l u t e ly staggered- What can I say?”

With that, she threw down a matchbook she was holding and smiled the Midler smile. “Oh, â€¢ well, it’s the movies,” she said. In most of her films, she has played”the matronly foul mouth, so she was asked if she would like to do something different.

“Yes, I’d love to do something different, but the public will tell me when,” she said. “I’m having so .much luck. I’m nervous about rockingthe boat.”

You did “The Rose,” someone said. That was serious.

“Yes, ‘but I never got a job after that,” she said. “I’ve had my suecess doing comedy roles, but I do have other things in mind. I have a development deal with the Disney Studios. I have a couple of musicals and dramas in mind. My own instinct is that my true forte is musical comedy, so I’m going to t ry to m a ke t h e m.

They’re in development. You know what that means. It’s like being stretched on a rack.”

Midler first won fame in night clubs and ba th houses. R e c o rd albums and television specials followed. She also did her club act for the screen, and this is the quality she would like to bring to her feature movies. “I’d like toÂ bring that to film,” she said.

One of the things she would like to do i s .a m o v ie a b o ut t he Andrews Sisters, but it doesn’t look as though she will realize that ambition. “It wouldn’t be their life stories,” she said. ”It would be about their work with the USO during World War ii. It would be that part of their lives. I’ve talked to both Patti and Maxene, but they don’t talk ,to each other, so it doesn’t look as though we will ever do it.”

She had another idea. She wanted to do the story of Martha Raye, not her life story but a film a b o ut h erÂ a c t i v i t i es o ff t he . screen. “Few people know it, but Ma r tha was a n u r s e ,” said Midler. “She actually worked in hospitals- It’s a great story, but I don’t think that one will be made either. Her agent wanted too mu c h, and we couldn’t ma ke a deal.”

The Andrews Sisters and Raye aside, Midler is having a great time. “I’m having a wonde r ful life,” she said. “It’s taken a long time to be able to say that and not be afraid that I’d jinx it.”

Someone mentioned one of her recordings, “Knights in Black Leather,” and asked if she would do that again. “Well,” she said, “that’s the exception. That’s one thing I don’t think I would do again.”

With that, she went on to the next table where she proceeded to smoke two cigarettes, two months’ ration, but then motherhood and table hopping with the press can do that to you.

“Outrageous Fortune” opened Jan. 30. Peter Coyote is the guy who uses both the leading ladies who then pur sue him about the country, to his discomfort. The film is being released by Touchstone, the Disney subsidiary created to handle those films that fall outside the “Mary Poppins” genre. This one does.