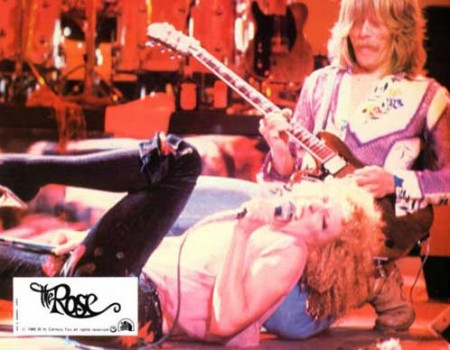 An out-of-state film critic pompously assured me last week that a lot of dialogue in “The Rose” was “pure Bette Midler. Just her talking.

Then came the cork for this fellow’s abundant self-confidence. It turned out “The Rose” had been written eight years ago for Valerie Perrine of “Lenny” fame.

But the point was very clear: Bette Midler’s performance in the Mark Rydell film is a special one. It’s done so well that it seems too real to be acting.

AS A REFORMED junkie rock ‘n’ roll superstar eventually driven to a lonely death, Midler delivers gusty, uninhibited fire on stage. Yet, the singer’s acting talent shows remarkable maturity for her film debut (aside from playing extras in “Hawaii” and “Goodbye, Columbus”). Her character, a sad and lonely girl forced to accept audience applause as the only love she trusts, is possessed of a special innocence and sensitivity which Midler gives with total commitment.

The story of “The Rose” was originally about the life of rock singer Janis Joplin titled “Pearl,” the name of the
posthumous album Joplin was working on when she died of a heroin overdose in 1970. But the title and story were changed when Aaron Russo, Midler’s one-time romantic interest, took over production of the film. The title character, or Mary Rose Foster, was rewritten to be a composite of the great, tragic rock stars of the ’60s, although the Joplin
history still dominates the work.

THE PROBLEMS of the rock stars of the age, Joplin, Rolling Stoner Brian Jones and Jimi Hendrix, were all too similar. As one writer put it, “All three lived it up as though tomorrow might never come, and eventually it did not, none of them lived beyond 30.”

The Rose is one of those virtuosos living just on the brink of life, trying to find a reason to hang on for another
day. Midler, herself exhibiting many traits common to the late artists, conveys the sense of loss and confusion reportedly common to the ill-fated performers who, like a rose, have their moment to bloom before fading away.

The period of “The Rose” is supposed to be 1969, but Rydell’s film has neither an authentic look nor feel of the times. The only evidence of the Vietnam war is a news broadcast in the background as Midler and co-star Frederic Forrest drive along in a limousine. Then, there are a few token peace signs flashed in crowd scenes curiously devoid of protest signs and anti-war slogans.

Forrest, the Texas actor who played Lee Harvey Oswald in a made-for-TV film “Ruby and Oswald,” is the wandering AWOL army sergeant named Dyer who brings- Rose her first taste of real love and sense of solidarity.

THE INTERACTIONS between Forrest’s and Midler’s characters are sometimes violent and always amusing. As some performers are apt to do.

Rose refers to herself as “The Rose,” enabling Dyer to deliver the gentle put-down that keeps her in place. “Ah think that ‘anyone who would talk about themselves in the third person is looney-tunes” he says.

There are happy moments in the story, marvelously funny scenes (Midler breezing through a men’s Turkish bath reciting a warped version of “Peter Piper”), but the unhappmess, the loneliness and isolation of the superstar always come back to destroy those fleeting moments.

Bearded Alan Bates appears as Rose’s one-dimensional British manager, an unfeeling monster determined to grind money out of his superstar even to the point of running her into the ground. The role is well-defined, but because of the overwhelming zeal with which Bates exploits the star, it’s not clear if her dramatic and drawn-out death on stage is prompted by her own seeds of destruction or by the uncaring, unrelenting cruelty of the manager.