BetteBack Scenes From A Mall 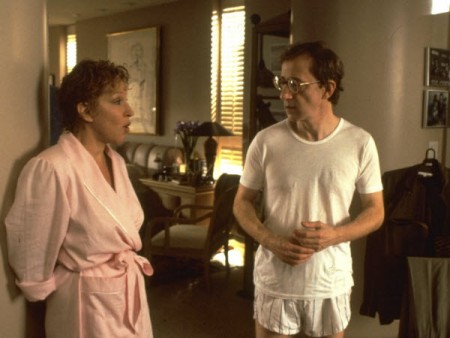 Pairing Woody Allen and Bette Midler together as a well-to-do married couple in Los Angeles is one of the most inspired bits of casting in movie history. I hear echoes of Gable and Lombard, Bogart and Bacall, Hepburn and Tracy and now Woody and the Divine Miss M.

In all honesty, “Scenes From a Mall” could have had Allen and Midler sitting in a white room talking about chalk for an hour and a half and it still would have been funny. As it turns out, we got the bonus plan.

It’s the day before Christmas, but for Nick and Deborah Fifer it’s more special. Today is their 16th anniversary. Before celebrating at
their dinner party, they hop into their Saab convertible and cruise down to the Beverly Center to do some last minute shopping.

Amidst the throngs of shoppers, Christmas singers, rap groups and a very annoying mime (Bill Irwin), Nick and Deborah are the apparent model for modern- day marriages. Sixteen years and two children later they are still in love enough to go shopping together,that is, until Nick admits some recent infidelities. Then things get interesting. As if feeding off the frantic buying going on about them, Deborah demands a divorce.

Then, in the spirit of the season, they make up. However, it isn’t long until they’re back at one another’s throats.

“Scenes From a Mall” is actually one prolonged series of fights and apologies. One of the most riotous make up scenes takes place in the mall’s cineplex where they watch “Salaam Bombay” (in its third year) with no one else in the audience. Well, almost no one.

Director Paul Mazursky must be commended for ever getting Allen to appear in this film. Rarely does Woody appear in a film he didn’t direct himself. Mazursky and co-writer Roger L. Simon also had enough sense not to introduce lots of extra characters. Either Allen
or Midler are on screen the entire film, which derives most of its humor from the interplay between the two leads.

Here we have two people who are arguably the funniest man and first time. A priceless testament to their chemistry is a hilarious scene
before they go shopping in which Allen furiously tries to undress Midler while she talks on the phone. Allen also pulls off the best
line of the film, commenting on the virtues of New York versus Los Angeles. Even Midler, at her buxom best, hasn’t had such a juicy
role since Mazursky’s “Down and Out in Beverly Hills.”

The humor isn’t as outlandish as “L.A. Story,” nor does it even attempt such a leap. What the film delivers is a belated valentine to
fans of Allen and Midler who would like nothing more than to see them on screen doing what they do best â€” providing lots of laughs.

DDDVa (“Scenes from a Mall” is rated PG-13 for adult language.)

â€¢Â»â€¢
Oscar Update: For the record, my Academy Award predictions were on target this year â€” mostly. In the six major categories I nailed
21 of 30 on my first round picks. Counting second team selections I had 25 of 30. Okay, so I did say “Ghost” and “Pretty Woman” wouldn’t get any major nominations, but with an 83 percent success rate I figure I can escape with some dignity. Stay tuned for the Oscars on March 25, with more predictions before then.