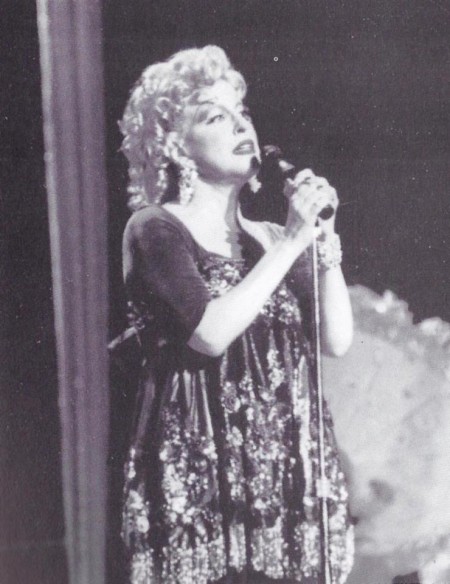 Sassy, brassy, sexy and wise. The Divine Miss M is all of those – and more. Bette Midler stormed the Irvine Meadows Amphitheatre on Thursday night, singing, wisecracking and mostly vamping her way through a 2-hour concert that showed why she is the best-known secret in live performing. Midler dragged out her wellworn Delores Del Lago mermaid persona, chased her famous Harlettes in electric wheelchairs, sang tunes ranging from “Friends” to “Boogie Woogie Bugle Boy” to “From A Distance,” shamelessly pandered to the crowd by pointing out she saved her “biggest record” for the encore, “Wind Beneath My Wings,” went through a half-dozen costume changes and even tossed in a medley of “Gypsy” tunes. She did it all with such an overthe-top style that one couldn’t help but laugh with her–and the rest of her adoring audience.

Hey, this is a woman who has her dancers wear pasties, then paints smiley faces on their chests. Of course, this was a homecoming of sorts for the slimmed down Midler, who brought her daughter, Sophie, 7, on stage during “Ukelele Lady” while the eight band members and a couple of others plunked out the tune. “I do love Orange County. I have a house here,” Midler said, pausing, “I don’t tell my Democratic friends. I’m too embarrassed.” ^ .

Battling jet noise from John Wayne Airport, Midler wondered if the planes were Stealth bombers. Then she brightened, explaining she was really thrilled to be playing Irvine Meadows because “it has always been my ambition to play next to a water slide,” which, as locals know, refers to the adjacent WUd Rivers park. Midler even used her wellknown anatomy for some local jokes, pointing at her chest and saying this is where the angels meet twins.

I don’t think she knows why they call it Neverland. And Midler is worried about all of America. “Why would anybody buy hair products from Cher?” she wondered. she wondered. “She wears a wig.” , Midler confessed that she, likeÂ any stars, is worried about the environment. She explained that her solution to world peace is composting, “because that was all that was left.” Â Amid crooning “Bridge Over Troubled Water” while teetering on top of three mermaids and espousing Delores’ “12-stroke program,” Midler lamented the “muddy nuclear waste of San Onofre.” It wasn’t all kidding, however. Midler connected with her localÂ fans, saying, “I have a house down in Laguna Beach and I’m very proud to be a part of that city, which has a recycling program.” Later she said, “I shot ‘Beaches’ at Crystal Cove, and it’s the most beautiful beach in the world.” Through it all, the singing remained the highlight for the winner of two Emmys, four Grammys, a Tony, two Golden Globes and two Oscar nominations. “Do You Want to Dance” and “The Rose” were among the concert’s standouts. And her finale choice, “The Glory of Love,” hit just the right schmaltzy note.