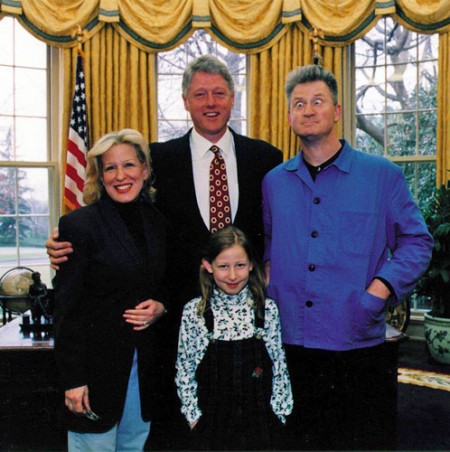 But it was President Clinton who delivered the most welcome words of all Friday night at a White House reception and performance for National Public Radio.

Pushing aside for a night the threatening words from Capitol Hill against federal funding for public broadcasting, a starstudded crowd gathered in the East Room to celebrate NPRâ€™s 25th anniversary.

Headliners from Midler to Robards lent their talents to tape a special production of â€œ NPR Playhouse, Live!â€ about life in the White House that will be broadcast later.

Even the irrepressible stars of NPRâ€™s popular â€œ Car Talk,â€ brothers Tom and Ray Magliozzi, got in on the act with a special presidential
edition of their show.

They proffered advice on everything from Eleanor Rooseveltâ€™s bad cooking to Dwight Eisenhower’s golf cart and Thomas Jeffersonâ€™s complaints about the transformation of George Washingtonâ€™s birthday into an annual mattress sale.

Their advice to Mrs. Roosevelt included a tip from their own mother, also renowned for her poor cooking. When making lasagna, â€œ she grinds up the Rolaids right in it,â€ the brothers said.

The two also inquired asked Clinton about his prized 1967 Mustang convertible. â€œ I canâ€™t drive it because the Secret Service wonâ€™t let me,â€ the president lamented.

Midler told the crowd it was her dream to come to the White House â€” â€œ and I didnâ€™t have to spend a dime to get here. Take that, Dan Quayle.â€