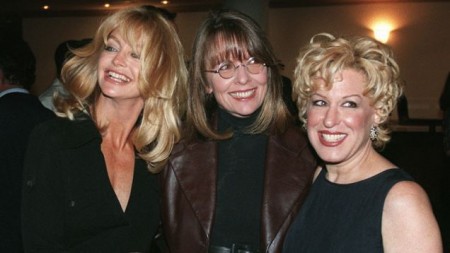 Just when we were getting used to the idea of Diane Keaton as a director, here she comes roaring back as an actor. Before the year ends, she’ll be seen opposite Meryl Streep, Hume Cronyn and Robert De Niro in “Marvin’s Room.” And on Friday, she got mad – then got even – as one of three discarded wives in “The First Wives Club,” opposite Goldie Hawn and Bette Midler.

Well, maybe roaring back is putting it a little strongly. The word from the “First Wives Club” set was that if all three were served a bad meal, Hawn and Midler would send it back – while Keaton would smile, eat it and get sick. Still, after a couple of years behind the camera with “Unstrung Heroes,” music videos and TV movies (“Amelia Earhart,” “Wildflower” and “The Girl With the Crazy Brother”), she’s very much back in front of it again.

Contrary to the impression the public has had of her since “Annie Hall,” she is perfectly able to complete declarative sentences and in general comes off as poised and objective about herself. Sitting ramrod-straight in a Manhattan hotel suite, elegant in a cream-colored pantsuit, smiling reflexively and fingering the ends of her trademark pageboy haircut, Keaton rolls her eyes at the thought of directing herself. “No, that’s out,” she says. “I need a director. I couldn’t direct myself. I’m always going to feel a little more comfortable being a performer because really that’s what I’ve done all my life. The other is much more of a challenge, a huge responsibility.” Nobody, in fact, can direct a film and be as scatterbrained as people have assumed Keaton is ever since “Annie Hall” plunked her permanently into our folklore.

Dispelling the image of Annie Hall with a megaphone, Keaton says, “Penny Marshall seems a little scatterbrained, but, you know, she’s a great field marshal. I don’t think everybody gives commands the same way. My style is backhanded, I’d say. It’s still a command.” As for the change in her acting persona, Keaton says just wait until “Marvin’s Room,” when she’ll be seen as a proud, dignified woman living with leukemia.

Meanwhile, yes, she admits, there’s something of her insecure-woman persona in the dumped-wife role in which we’re about to see her. “I understand the idea of a woman seeking her identity through her husband, not developing her own personality and sense of self-worth, and then getting dumped for that very reason. But the fact that her husband does leave her is the greatest thing that happens to her in her life.

“You know, I’m thinking now of the parts I’ve played that haven’t been that kind of a woman. They probably haven’t been as embraced as the ones where I have played a more struggling, more incomplete kind of insecure woman. Because I was pretty tough in `Baby Boom’ and I was certainly different in `Mrs. Soffel.’ But I think the ones that stand out are the ones where I’ve been kind of insecure. I guess people like me that way. Maybe they find me more interesting in that kind of part. Because really what we’re talking about is popularity – that’s all we’re talking about. We’re not talking about how I feel about it, or anything. I’m not haunted by `Annie Hall.’ I’m happy to be Annie Hall. If somebody wants to see me that way, it’s fine by me.

Acting, directing, it’s simply a matter of the best thing that comes along at a given moment, Keaton says. “Every directing job I’ve ever gotten has been the same as the acting jobs. I did not develop them. I am not an auteur. Somebody says, `Will you read this, tell us what your thoughts are?’ Basically, you audition with your ideas. You say, `This is what I want to do with it, this is the way I see it, this is how I would further like to develop it.’ That’s what you do as a director. You sit down and you talk about how you would make it work. I’d like to direct more. It’s frightening, but the fact that it’s frightening is a very compelling thing for me. I’ve always liked doing something I’m afraid to do. Television is less terrifying bcause you’re spending less money. You don’t have $40 million on your back – which, by the way, I’ve never had that kind of money.

“I think it’s fun to work with obstacles. It’s fun not to have enough money, so that you shoot down in North Carolina in 20 days. You learn through limitations. Didn’t George Stevens do all those Laurel and Hardy short things? Directors learn that way.”

Keaton also learned, of course, from Woody Allen, with whom she has made eight films, starting with “Play It Again, Sam.” Allen has been one of three film luminaries with whom Keaton has had off-screen relationships – the others being Warren Beatty (who directed her in “Reds”) and Al Pacino (who co-starred with her in “Godfather III”). In 1993, when Allen’s life with Mia Farrow was crumbling, Keaton loyally stepped into “Manhattan Murder Mystery” to star opposite Allen. She would do it again, she says, if the project were right.

“He’s my mentor,” Keaton says of Allen. His low-key manner on the set and his way of letting actors experiment influenced her, she adds, as did his work ethic. “I learned from him to leave actors alone, to let them play around. He’s always about loosening it up. I myself respond to very simple directions. Sitting around for hours and talking about a character would just drive me out of my mind. From just watching Woody Allen watch actors, I learned that one of the things a director does is to be someone who looks. I can’t really have his talent, or his mind, or his imagination, or his editing skills, or any of that,” she says.

“But he always knows what he likes pretty quickly, and I learned to trust my instincts – that if I like it, go with it. What I learned from Warren Beatty is to ask a lot of questions and take whatever you can from all the people around you. When I directed `Unstrung Heroes,’ I took from everyone.” Yet it was working with a woman director, Gillian Armstrong, in “Mrs. Soffel,” that first gave Keaton the urge to direct.

“First Wives Club” has a musical finale, a boogie of triumph danced by the wives. With characteristic self-deprecation, Keaton says she was the slowest to learn her steps. Still, she says, it was fun to do a musical number – again. People forget that she first came to Broadway in “Hair.” “My big fantasy when I was young was to be in musical comedies on Broadway,” she recalls. “In high school and junior college I played Maria in `Sound of Music,’ I was in `Bye Bye, Birdie’ – I did all of that. I’d love to do a musical. Woody Allen has a musical coming out this year (`Everyone Says I Love You‘). I’m not in it. Goldie’s in it. I’d like to do more physical comedy, too. It was fun doing that in this movie. I enjoyed hitting my therapist. I really enjoyed screaming when the window-washer’s gondola falls with us on it, and I also really enjoyed yelling at my husband. These are things actresses love to play, you know? Revenge, anger and being terrified are the best fun.

“All things come in spurts,” Keaton says, growing philosophical, candid about the fact that she’s 50. “It’s always hard to find a good role, but yes, it does naturally get more difficult as you get older because there are fewer good parts.” She says the aging process both worries her and frees her. “I think in some ways you feel secure about who you are and in other ways you feel deeply unsure,” she says. “It’s totally different than being 20 or 30 or 40. I think there are great advantages to being older. Little things mean more to me – the morning light when I take a walk with my dog. And I really have stronger family ties than I used to have, especially with my mother. I really can’t imagine my life without them.”