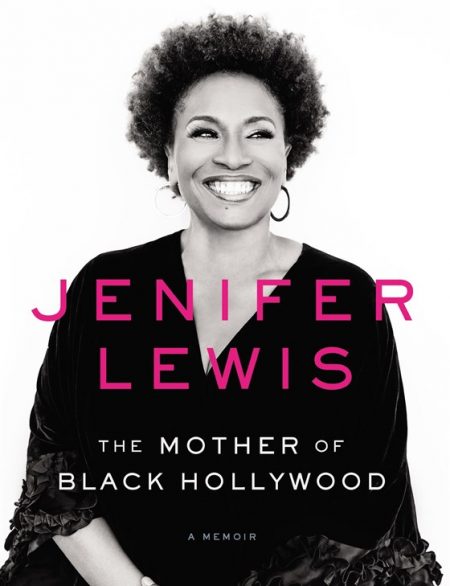 Veteran actress Jenifer Lewis has a way with words — anyone who comes into contact with her can attest to that. For the better part of her nearly 40-year career on stage and in front of the camera, the scene-stealing powerhouse has gained a reputation for not only her acting talent but also for being a brassy diva with a heart of gold.

On any given occasion, she’ll refer to herself as an expletive — even going as far as to inject a four syllable word in between her first and last name when mentioning herself — with rapid-fire cadence.

In the literary form, Lewis is a fierce storyteller with a penchant for robust detail served up in a raw and often humorous fashion — which is on full display with her debut offering, the much-anticipated memoir, “The Mother of Black Hollywood” that hits bookshelves Nov. 14.

In the page-turner, the trained thespian tells scores of stories about her roller coaster life in and out of show business, such as being molested by her family’s preacher, once stopping a man from sexually assaulting her, and how she dodged true love, trading it in for sexual trysts with men (some famous, some not) all around the world.

Lewis, 60, opens up about everything from losing legendary roles (including “Dreamgirls,” “Orange Is The New Black”, and “Getting On”), engaging in physical confrontations with fellow cast members, overcoming sexually transmitted diseases, substance abuse, and her struggle with mental illness.

“I ain’t trying to hurt nobody,” the Kinloch, Missouri, native told NBC News about the warts-and-all walk down memory lane. “I don’t care who rolls up about anything I wrote. The one thing I did in that book was I told the truth. I was honest. This is my story. This is my song. This is how I saw it, felt it, tasted it, touched it.”

Admitting the book was difficult to write — specifically revisiting solemn memories of her many friends who perished from AIDS during the height of the pandemic in the 1980s — Lewis said she left no stone unturned.

“It took me two years to write this b—h. It hurt. I had to relive my babies’ dying from that stupid disease, relive all those f—ing deaths. Goddamn this book was hard,” she said.

Lewis has surely lived up to the title of the book, racking up over a hundred film and television acting credits — most notably in 1993’s “What’s Love Got To Do With it,” 1996’s “The Preacher’s Wife,” Lifetime’s 1999 cult favorite “Jackie’s Back,” and, most recently, ABC’s award-winning sitcom “Black-ish.”

Before Hollywood finally came calling, Lewis recounted, how she toiled on the theater circuit, performing in everything from camp comedy solo shows to acclaimed Broadway musicals and with national touring companies. Eleven days after graduating from college, she landed a role in a hit production on The Great White Way. She sang in the streets for money, performed vaudeville-style acts on bus and truck tours, and sang backup for Bette Midler (who has called her “the greatest black entertainer who ever lived”).

“Here it is, darling: performing in front of people is like brushing my teeth,” she said. “I breathe this sh*t. After that solo in First Missionary Baptist Church in Kinloch when I was 5 years old, I never looked back. That love washed over me. Like I said in the book, it’s a slow tsunami.”

“I had to be a star,” said. “That’s what the whole book is about, baby. The book is about how I found my passion, found my dream because it was the dream that has sustained me.”

The success of the Emmy-nominated “Black-ish” isn’t the only reason Lewis has found popularity with newer audiences. A series of videos with Grammy winning singer Brandy Norwood, Nicole Ari Parker, Lee Daniels, and others have become viral sensations. She said the platform is big and millennials love her — another reason she wrote the book.

“I say to them, ‘You better learn something. You better get something out of this. Don’t let me bare my soul for nothing,” Lewis added.

She said she hopes her book will encourage others and give them hope.

“I always say when there’s a tattered copy of my book, after I’m long gone, in a war torn country and a little girl is trying to make one more step in her life, and if she reads one thing in this book that will help her do that, my life would not have been in vain.”