If you’re a music lover, check out the PowerPop Blogspot: Click Here

All-Time Best or Worst Covers of Songs by the Rolling Stones!!!

No arbitrary rules here, but just so we’re clear — we’re talking about covers of songs by the Stones, not songs that the Stones covered. Jagger/Richards tunes, in other words, as interpreted by other artistes or miscreants.

And my totally top of my head Top Fourteen is —

On balance, if I had to pick my favorite Stones song of all time, this would be it, and this great blues guy just nails it to the wall. Genius at work.

In a million years, it never would have occurred to me that this bunch would do such a great version of this masterpiece from Exile on Main Street. But then again, the late Scott Miller was a freaking genius, so I shouldn’t have been surprised.

Recorded with a boom box in front of the band at one of our legendary gigs at the Other End, with the late great Andy Pasternack doing the famous opening Brian Jones riff on an electric 12-string, and our singer’s then girlfriend discussing the tab.

As you can see (and hear, especially at the end) I got to do my best Bill Wyman imitation on bass, which was a hell of a lot of fun. 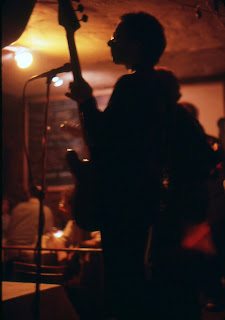 Love these young gals from Liverpool. Their version of this one doesn’t have the air of menace of the original, but it more than makes up for that by sheer sprightliness.

This actually came out before the Stones version on Sticky Fingers, and after all these years I still kinda prefer it. Gram Parsons never sang more affectingly.

Jeebus H. Christ on a piece of challah toast — despite the presence of the great Waddy Wachtel on guitar, this sounds like Ronstadt recorded it with a metronome rammed up her ass.

You know, I get a little annoyed sometimes by uninformed anti-Baby Boomer snark from younger friends, but then sometimes I remember — shit, my generation actually bought this dingbat’s records.

This one totally misses the point, I think, but of course nothing says “Total victory is ours, comrades!” like an album marketed by the Sony Corporation.

Miss M’s finest recorded moment, no question. Certainly it beats “Wind Beneath My Wings” all to hell.

I had mixed feelings about this one for the longest time — the original is, IMHO, one of the Stones’ genuine (if mostly overlooked) masterpieces, and SD’s punkish take lacks a certain depth and ambiguity. On balance, though, I think it’s effective on its own terms.

4. The Dirtbombs — No Expectations

I’m a huge fan of these guys, but I have to admit, in theory I didn’t figure this one was going to work. Frontman Mick Collins’ trademark punk-with-soul turns out to suit the song to a T, however (as does the mashup with another Stones classic).

3. The Supersuckers with Steve Earle — Before They Make Me Run

The band is a little clunky, but if anybody has a right to sing Keith’s outlaw blues classic it’s Earle.

Seriously, this is worse than that kid on American Idoldoing “Under My Thumb.”

And the number one simultaneously best AND worst Rolling Stones cover of all time, it’s not even a contest my friends, is….

1. Charo — Let’s Spend the Night Together

Alrighty then — what would your choices be?

Oh, and have a great weekend, everybody!