Sure, there may be songs you wish were banned from karaoke playlists, but these tunes are actually prohibited from being used at karaoke night. The horror! 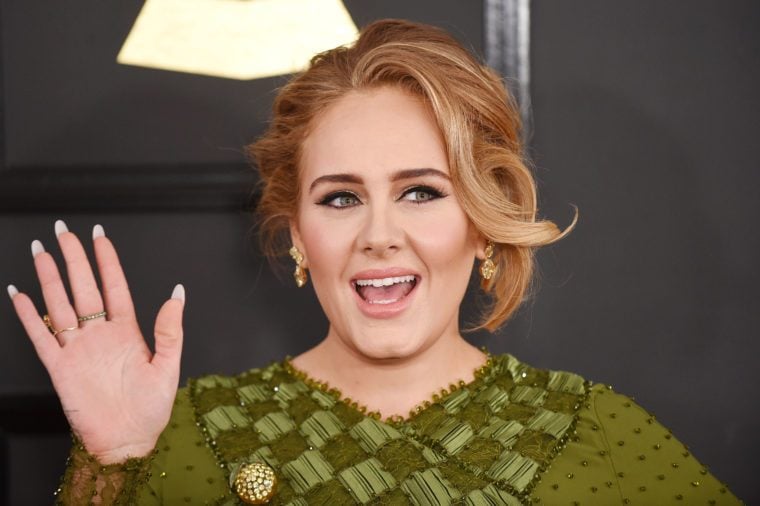 Broadimage/REX/ShutterstockDon’t expect to find this Adele power ballad in any karaoke songbooks. In 2017, the British songstress chose not to issue a new license for her music, according to MSN. Seems like the only places you’ll truly be able to belt out her emotional tunes will be in the shower or in your car. Guess this is goodbye to “Hello.” Check out some more things that you won’t believe are banned in the U.S. 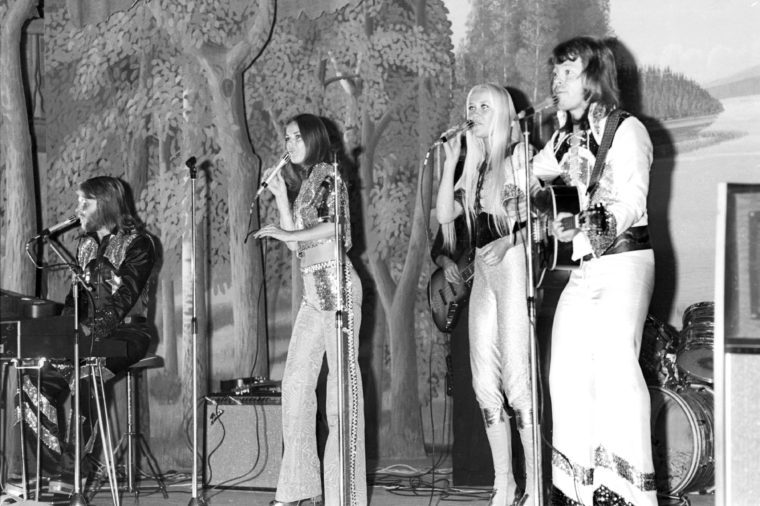 I.B.L./REX/ShutterstockThis seems downright cruel considering the Mamma Mia! sequel has all of us shuffling our feet to the Swedish band’s tunes, but “Dancing Queen” was also removed from karaoke catalogs in 2017. Similarly to Adele, the supergroup simply chose not to renew licensing. In an interview with the Daily Mirror, Jay Taylor, director of karaoke disc-maker Vocal-Star, said, “We can’t understand why they’re doing it, it makes no sense.” Love disco tunes? Here’s what your favorite type of music says about your personality. 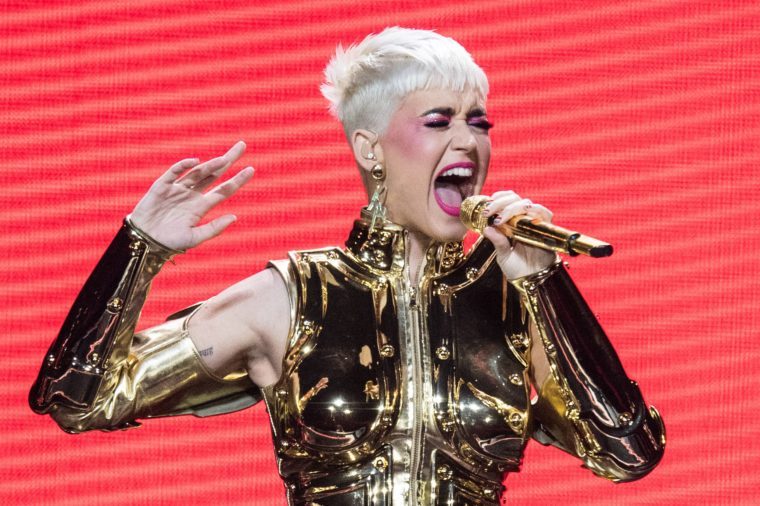 James Gourley/REX/ShutterstockAnother shock to karaoke lovers was when Katy Perry joined the ranks of Adele and ABBA by pulling her motivational jam “Roar” from the books. Again, no one really knows why there was this sudden move to omit some of these songs from karaoke. We’d just like to remind the singer that she did participate in James Corden’s popular Carpool Karaoke segment, so could she please give “Roar” back to us? Pretty please? 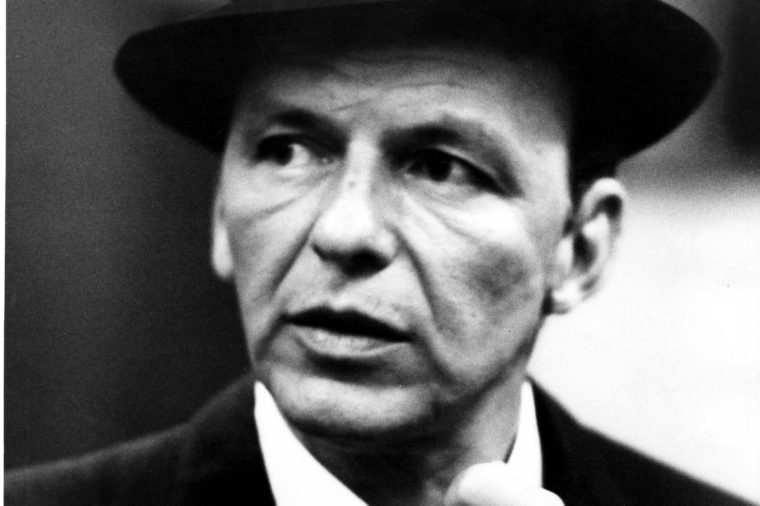 Dezo Hoffmann/REX/ShutterstockDon’t worry, Sinatra fans—this particular ban applies only to the Philippines, but the reason behind it is pretty gruesome. The New York Times reported a series of murders in that particular country over karaoke versions of “My Way.” There were at least six fatalities on record associated with singing the tune at a karaoke bar, but the Times story admits there’s a possibility there’ve been even more. Some karaoke-goers attribute the violence to the arrogance the song evokes. Here’s why you get goosebumps when you listen to good music. 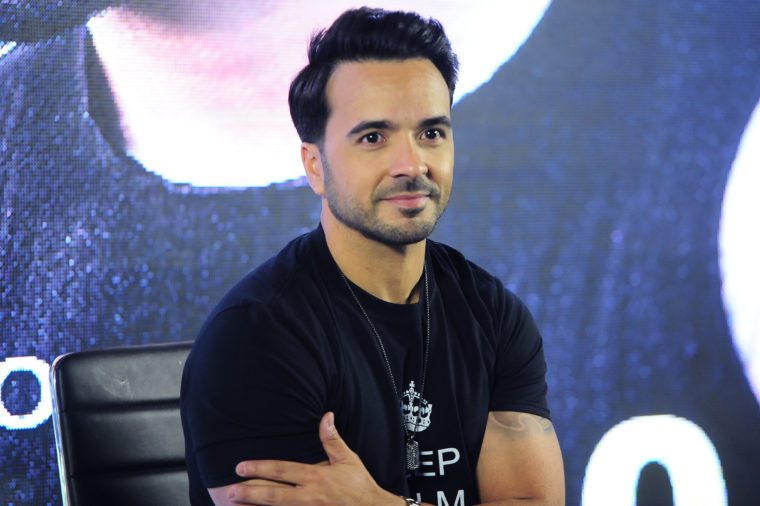 Carlos Tischler/REX/ShutterstockDon’t expect to sing Luis Fonsi’s “Despacito” at karaoke night if you find yourself in Malaysia. You’ll have to pick another track. The BBC reported that a senior minister considers the tune, which also features Justin Bieber, “un-Islamic.” “The lyrics are not suitable to be heard,” said Malaysia’s communications minister Salleh Said Keruak. 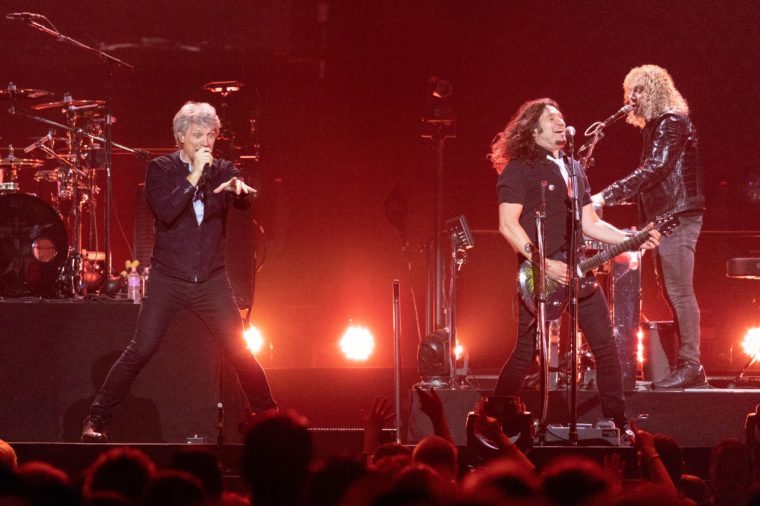 RMV/REX/ShutterstockThe New Jersey rockers have penned many a jam over the years, but “Living on a Prayer” has to be among their top most requested tunes on karaoke night. That is, until the song’s licensing agreement was removed for karaoke format. In fact, these days all Bon Jovi songs are on the banned list, per licensing rules. “Artists might want to negotiate their own deal with karaoke companies, or it might be they don’t want songs overplayed [so much that they] put people off,” Rob Kempton of music rights consultancy Footprint Music told The Sun. But maybe overplaying isn’t so bad—check out the incredible hidden health benefits of music.

“Wind Beneath My Wings” — Bette Midler 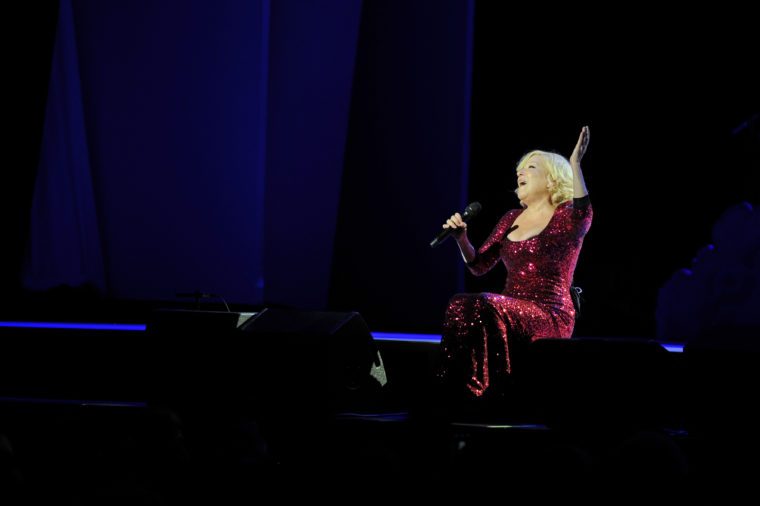 Larry Marano/REX/ShutterstockIf you’re in the Philippines, don’t even think about requesting a Bette Midler tune, like “Wind Beneath My Wings.” The country has banned all of her music from its karaoke bars. According to The Adobo Chronicles, the ruling came down after the songstress posted a tweet calling Philippine President Rodrigo Duterte a “murderous dictator.” Political disputes are also the reason McDonald’s is banned in some places in the world, too. 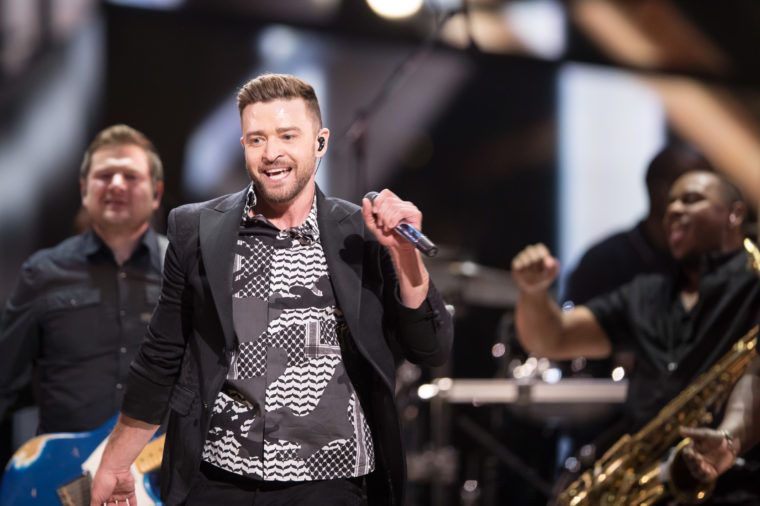 Rolf Klatt/REX/ShutterstockSay it ain’t so, JT! The toe-tapping, feel-good tune that originally appeared on the Trolls soundtrack and is loved by kiddos and grownups everywhere is on the banned karaoke songs list. Yes, that same list that says we can longer croon along to Adele or Katy Perry. As reported by The Sun, the massive purge of karaoke songs is hitting the industry hard. After all, if you can’t sing your favorites, what’s the point of investing in a karaoke machine or hitting a club? 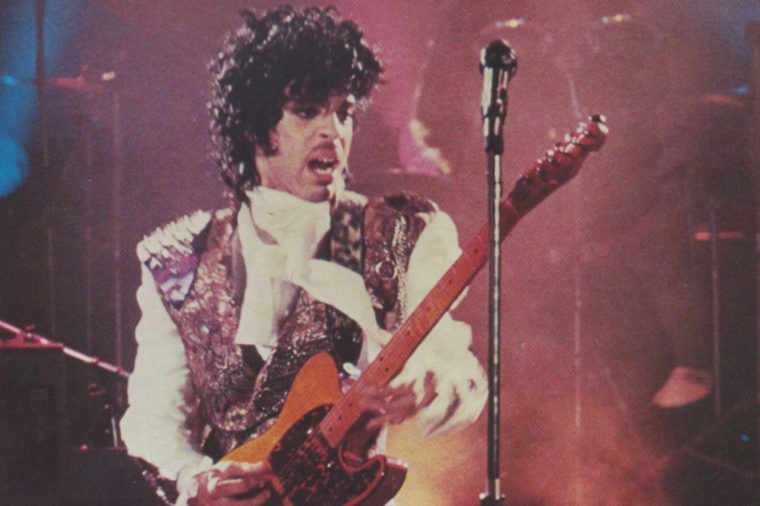 Moviestore/REX/ShutterstockA perennial karaoke favorite, “Purple Rain” has also been banned from being performed karaoke-style. Last year the ballad was given the red light by the late musician’s record label because, yet again, they weren’t going to issue a licensing agreement for the song (among others by “The Purple One”). Check out some other songs that were featured on some really rockin’ movie soundtracks. 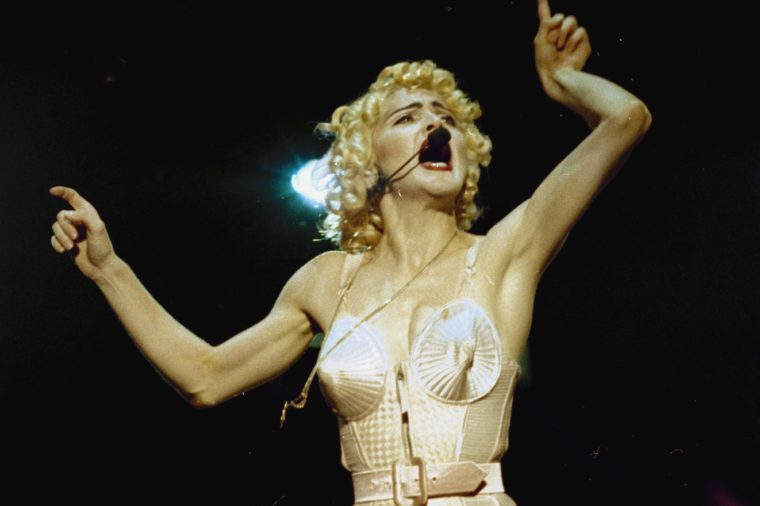 Anonymous/AP/REX/ShutterstockMadonna has long been banned around the world for various reasons—like that time she was banned from singing the track “Holy Water” in Singapore, as reported by The Independent. But now, here in the U.S., we can’t sing karaoke to her ’80s hits “Holiday.” Thankfully we can (and will) still dance around our living room singing it into a hairbrush. 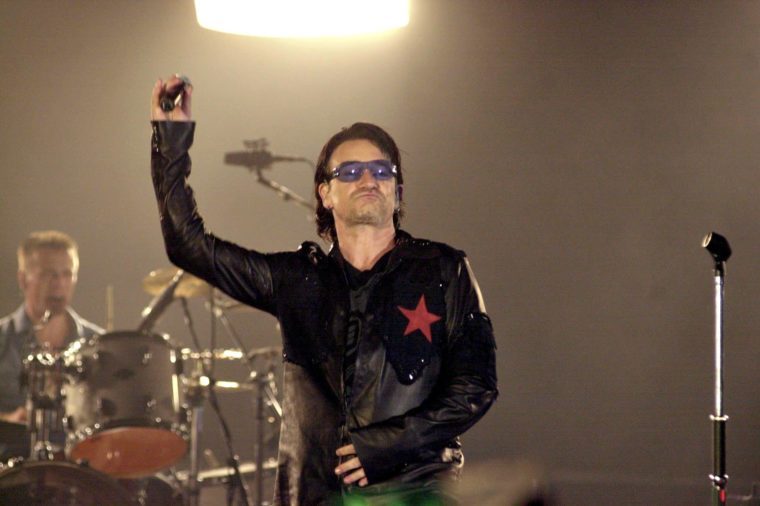 Tom Farmer/REX/ShutterstockIf you’re at karaoke and reminiscing about Ross and Rachel’s most romantic moments on Friends, U2’s “With or Without You” may come to mind. That’s lovely and nostalgic…just don’t try to sing it at your next karaoke night. It’s another one of those dubious tunes you can no longer find in a karaoke format due to licensing restrictions. Get a look at the hilariously bad original lyrics of some of your favorite rock songs.

“The Edge of Glory” — Lady Gaga 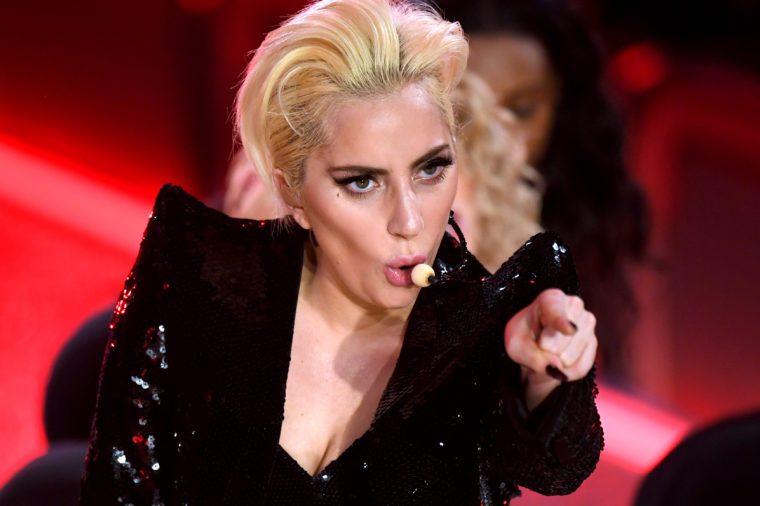 David Fisher/REX/ShutterstockChina has engaged in a major crackdown on music they consider “too vulgar” for their citizens, according to Capital FM, and that includes Lady Gaga’s “The Edge of Glory.” While that may seem like a surprising choice to make the list, given some of Gaga’s more controversial tunes, it joins another one of her hits, “Judas”; Katy Perry’s “Last Friday Night”; and Beyonce’s “Who Run the World (Girls).” At least she’s in good company. 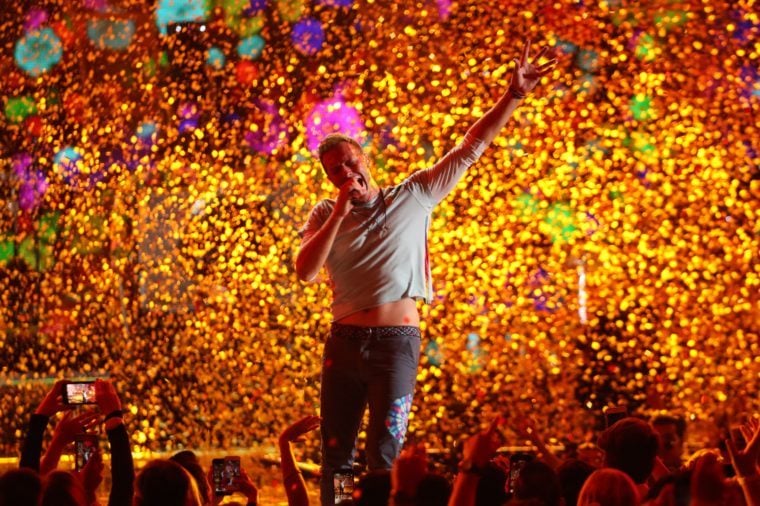 Chelsea Lauren/Variety/REX/ShutterstockYou can kiss “Paradise” goodbye, at least as far as karaoke is concerned. The totally singable Coldplay hit was removed from the platform due to a lack of licensing agreement. If this is your jam, we feel for you, but there are plenty of other mid-tempo tracks out there to croon, trust us. Next, check out some more surprising things that are banned around the world.