I. Thank You Oprah 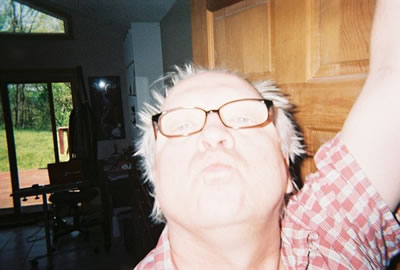 (Me before leaving Nashville)

Fly! Fly! Fly Away! So high I almost touch the sky! Well, this is where I am; almost touching the sky. As I’m writing, I sit in an airplane continually interrupted by my mother who sits behind me. Why, dear lord, did I invite her? (Well besides financing the trip.)

“Don, do you need a Dramamine?” “Don, did you eat something before you took your medicine?” “Don are you still nauseous?” Finally, the man sitting next to me on the aisle asked my mother if she’d like to trade seats. Lucky me! He said the prospect of me throwing up on him was not appealing. Whatever.

Although most of the trip was like the above, thanks to Oprah’s Eckhart Tolle online class, I learned to channel my mother’s negative energy and use it to my advantage. (Which means I learned to tune out that which I did not want to hear.)

For our New York residence, my mother selected an old private club where a friend of hers was a member. The members can share their abodes- like room and board. At first when I heard the words “private club” I thought, omg, it’s a sex club! That would have been cool, but not with my mother in tow. Puh-leeze!

The club turned out to be quite fabulous…we were right across the street from Radio City Music Hall and Rockefeller Center and on the corner was Saint Patrick’s Cathedral. Unfortunately, my room could not be seen by the priests, I always like to parade around naked for them, but now I’m too old and fat. Besides, everybody was waiting for the Pope to arrive, so I’m sure there was quite a bit of attention deficit disorder going on. No time to ogle a Larry Bud Melman look-a-like.! 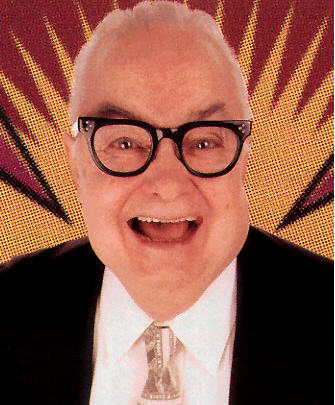 Now, more on the club/hotel! Turns out it originally was the “Republican Women’s Club” (which would explain the Laura Bush portrait in the lobby.) It would also explain my continuous bouts of gagging during my stay. On my mother’s floor, the portrait was Ronald Reagan. And mine? George W. Bush! The power of the portrait was overwhelming so I held up photos of Obama AND Hillary to protect me, but when I began projectile vomiting, it was time to pull out the wild card—–Oprah! All of a sudden peace reigned on Floor 9.

II. Then She Found Me

The next day my mom and I went our separate ways. We were to meet back at Hell around 4:00 PM to get all gussied up for the press screening of “Then She Found Me.” We knew there would be no stars or glamour at a press screening, well, unless we ran into Leonard Maltin, but we did want to look our best. Anyway, my mother mostly visited the best clothes places. I checked out music stores, both CD’s and sheet music types, colorful boutique shops, and meth labs. I was just so over coffee!

Eight blisters and 4 tokes later I was back at the hote-hell. Later my mom and I met in Satan’s Bar…the portrait there was of Betty Ford. Boy howdy has she raked in the dough! We both looked fab.

Now it was time to head to the famous Brill Building where the screening was to take place. We arrived and the place was beautiful….gold elevators, mirrored walls….ahhhhhhhh just like my bedroom! We took the elevator to the 5th floor and found The Broadway Screening Room.

Inside were all the critics. Very dour. Very haughty. Very quiet. I was all like “Where’d ya”ll get those notes?” and my mom was all like “Well, you sure look pretty in black!” Now, really, it wasn’t quite like that, but it was very tense and uncomfortable. Eventually we were escorted into the screening room. By the way, the only press names I recognized were Wall Street Journal and Backstage.

Now I know many of you might be saying, “Well how come you got to go and I didn’t????” And I’d say ” Just BECAUSE!” But the truth….I started a pen pal relationship with Ms. Elinor Lipman almost as soon as I found out Bette was to be in the movie. We hit it off…therefore ThinkFilms and I hit it off….this led to me being invited to a press screening. Okay, I begged! But see where it got me????

Needless to say, I loved the movie. I will tell you flat out that I’m not a critic, but I’m a devout BetteHead….which only means that I will buy all of her music, go to all of her concerts and movies, and just about anything else short of illegal “illegal.” But this does not mean I can’t be objective about her work. For most of her movie career it’s been hit and miss with me. But in this movie, she scores a bullseye for me. It’s a part deserving of her talent and she shines. Yes, she has made us all all laugh and cry before, but many of her past characters for the most part were played as caricatures. The director could have honed her in. But it took Helen Hunt to reign in Bette’s tornado-like force on screen. Bette seems more human and yet she can still make you laugh out loud or tear your heart apart with just a simple look or gesture. It doesn’t hurt that the character fits her like Cinderella’s slipper and that the dialogue is snappy and real.

I’m not going into the description of the plot for we’ve read it over and over in each critic’s piece, plus, I’m lazy that way. The movie does tackle some heavy issues with a light hand….religion, love, rejection, betrayal, anger, forgiveness….to me it’s a movie about the human condition…we’re all flawed, there are no easy answers, and we all struggle with our own demons. We, on the other hand, get to watch how it plays out with four very flawed characters who handle their situations with as much grace, aplomb, and wit as they can only muster up. The same as we do.

“Then She Found Me” is funny, sad, real….yes, sometimes contrived, but, hey…this is a movie. I enjoyed all the performances, although I wish Matthew Broderick would quit playing such a loser, louse, whatever…..BUT, he’s good at it. The scenes between Bette and Helen are always first rate. Hunt and Firth definitely have chemistry. All this made “Then She Found Me” a pleasant and almost overwhelming surprise for me. Both my mom and I clapped at the end of the movie. Looks like that might be a no no for New York critics. Faw Faw Faw!!!! 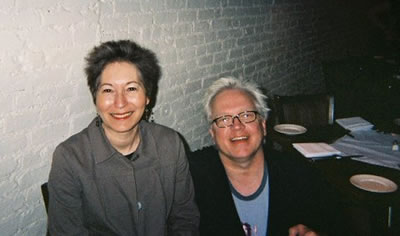 On the way home my mother and I just talked about the movie and how we enjoyed it. But then I started worrying about the next day. We were to meet the author of “Then She Found Me,” Ms. Elinor Lipman for lunch at Basso56 (great Italian Cuisine) per her request. Frankly, if she had not requested our company, I would have done so for her. We emailed so much over the last year or so, I just wanted to meet her. And so I did. With my mother…the original chatty Cathy!

Elinor was a pure delight…a tiny, cute little thing with tons of energy. She and my mother talked more than we did, but that was okay. My mom talks a lot, but it’s usually interesting and personal. You know, family secrets and closet doors are just disclosed, opened, and aired out to strangers…in this case an author. Maybe I’ll recognize myself in a future novel. I didn’t get permission to write about the lunch, but it was pleasant, easy-going, and interesting. And might I say the food was delicious, as was the waiter!

After lunch, we walked around a while and shopped. I bought a hat…my mother bought everything else. Matter of fact…I was tired and wanted to go back to the hotel and take a nap before we went to see Patti Lupone’s “Gypsy.” So we headed back to the hote-hell. I was so delirious when we got there the hand towels hanging from the bathroom began to look somewhat like KKK puppets. Maybe I really am crazy! A fat, crazy, naked Larry Bud Melman….where’s an open window when you need one???? I needed to go on that Anna Nicole diet….you know, alcohol and pills. She looked fabulous til the end.

“Gypsy” times infinity….that’s all I heard about. Patti this, Patti that…she’s the bomb…the best “Gypsy”…..you can’t get tickets….blah, blah, blah!!!! Well I got good tickets the day before the show…why Carson Kressley was sitting just 2 rows in front of me. How dang classy is that. And his guy friends looked like they stepped out of Vanity Fair or Playgirl….their facial structure was so flawless one could prick a finger on their cheekbones. Disgusting!

As for the musical, I thought it was fabulous. Patti Lupone was great and so were much of the supporting roles. Patti was a sexy, even a vivacious Mama Rose with a huge voice. Oddly enough, she seemed to hold back on the very songs she should have let loose on. I came away loving the show for many reasons, but I still give Bette the thumbs up for the best Mama Rose. When someone can give me chills up my spine like Bette does during the number “Rose’s Turn” then I shall crown them winner. Patti, Bernadette, Tyne, and the others lost this round. Next! And all you little theatre chatters stay on your own site and diss me. You’re not even man enough to let me join “All That Chat.” Boo and hiss your own selves!

The Pope was in town! Tried to see him. Missed him. Too bad.

For all the jabs I’ve thrown at certain groups or people, well, my plane ride back was my bad karma and I can take no more. I sat in a row of 6 seats filled with 4 kids, a mother, and a father who was so big he had to pull up the armrest between us. I was in hell for 2 1/2 hours. And not only that…my mother spent 4 extra days just to be with me. NOOOOOOOOOOOOOOOOOOOOOOOOOOOO!!!!!!!!!!!!!!!!!!!!!! 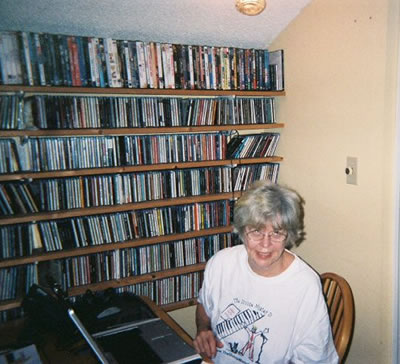 (The woman who spawned me! Love you Mom!)