Peace Sunday: We Have a Dream Concert 1982 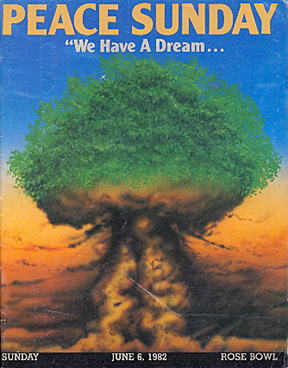 The â€˜70s and â€˜80s were decades that were chock full of big concerts being held for the best of reasons. Sometimes it was to draw attention to human rights issues (the Secret Policemanâ€™s Ball, the Conspiracy of Hope tour), sometimes it was provide humanitarian aid (the Concert for Bangladesh, Live Aid), and sometimes â€“ but particularly in the late â€˜70s and early â€˜80s â€“ it was to take a stand and protest nuclear weapons.

In 1979, Madison Square Garden was booked from September 19th through the 23rd for the legendary â€œNo Nukesâ€ concerts in New York, which resulted in a triple-album document of the event that featured performances from â€“ hang on, let us take a breath â€“ the Doobie Brothers, Bonnie Raitt, John Hall, James Taylor, Carly Simon, Jackson Browne, Nicolette Larson, Ry Cooder, Sweet Honey in the Rock, Gil Scott-Heron, Jesse Colin Young, Raydio, Chaka Khan, Poco, Tom Petty and the Heartbreakers, Bruce Springsteen and the E Street Band, and Crosby, Stills and Nash. Whew! And thatâ€™s not even all of the artists who participated: others who were part of the event but didnâ€™t find their way onto the distillation of the five shows include Peter Allen, Stephen Bishop, Paul Simon, and Peter Tosh.

In addition to the No Nukes concerts in â€˜79, there was also a notable nuclear disarmament rally on June 12, 1982â€¦notable because itâ€™s been called the single largest protest in American history, but also because the event included a concert in Central Park which featured performances from Springsteen, Taylor, Browne, Joan Baez, Linda Ronstadt, and Gary U.S. Bonds, among others.

Somewhat less remembered, however, is an event which took place six days earlier â€“ or 32 years ago today, if you hadnâ€™t yet picked up on why we decided to write about it â€“ on the other side of the country, at the Rose Bowl in Pasadena, California. It was known as Peace Sunday, and its tagline pointedly paraphrased Dr. Martin Luther King, Jr., with the poster for the eventfeaturing the words â€œWe Have a Dreamâ€ sitting just above an artistâ€™s rendition of a mushroom cloud rising up and transforming into a tree.

Yes, we know, it sounds like something Abe Simpson or Jack Donaghy would dismiss as a bunch of hippie malarkey, but they sure did pull together a hell of a lineup for the concert: the participants for this one included Gil Scott Heron, Jesse Colin Young, Graham Nash, Bonnie Raitt, Donovan, Timothy B. Schmidt and Don Felder, Crosby, Stills & Nash, Taj Mahal, Stevie Wonder, Joan Baez, Bob Dylan, Dan Fogelberg, Stevie Nicks, Linda Ronstadt, Bette Midler, Jackson Browne, Garry U.S. Bonds, and Tom Petty. The total attendance wasnâ€™t too shabby, either, with over 85,000 people turning up to listen to the music.

Over 85,000 people showed up at this concert to promote nuclear disarmament.