I havenâ€™t seen that many of your films, so I rented The Rose (1979) last weekend as well. I was really surprised. I mean, when rock fans talk about the great rock â€˜n roll movies, no one ever mentions it. But they should. What was it that attracted you to that story?

This woman turning herself inside out. The rise of an extraordinary talentâ€”it was based on Janis Joplin.

Did you listen to rock music?

Not as much as jazz. I was a professional jazz piano player before I became an actor; Iâ€™m really the generation prior to rock â€˜n roll. But Iâ€™d met Janis.

But she must have been gone before you had much sense of who she was.

Yeah, but even if you didnâ€™t like rock â€˜n roll, when she performedâ€¦ I mean, you see it in the various films that were taken of her.

I have indeed. Iâ€™ve been around long enough to see drugs destroy a lot of people. Many of my closest friends. As a matter of fact, I escaped by the skin of my teeth.

You sound like you were such a together guy.

Thatâ€™s a function of psychoanalysis. In those days, I wasnâ€™t so together. In the early days, drugs were present, and I experimented as well. But somehow I escaped. I never let myself go the distance, like so many people did in the sixties.

I think even more than drugs, Roseâ€™s most tragic flaw is her insecurity; her insatiable craving for any kind of love and acceptanceâ€¦ it just breaks your heart. Iâ€™ve never been that crazy about Bette Midler before, but man, she was justâ€¦

Sheâ€™s amazing. And it took ten years for Fox to accept her in the role. They offered me the picture, and they wanted a number of stars I could mention, and that weâ€™d loop all the singing.

They didnâ€™t want to go with an actual rock singer?

They wanted a star. Like Jessica Lange, who was big at the time. I said I wanted Bette Midler because Iâ€™d seen her performing in the gay baths in New York, and she was brilliant beyond belief. I knew she was the only person who could do it, but they didnâ€™t know who she was. So I walked away.

You really have to fight against conventional thinking when youâ€™re a director. Because people with less imagination automatically go to whatâ€™s comfortable. Nobody wants to be responsible for doing something daring, so youâ€™re always fighting mediocrity with many, many people in this business. Theyâ€™re the people who are all about success; who want to hang on to that corner office, and the fancy car. For them, mediocrity is safer.

So three or four other directors came and went from The Rose, and finally when Bette emerged as a star with her nightclub act, and the studio people saw it, and they knew I was right, they came back to me and said, â€œOkay, weâ€™ll do it with her.â€ 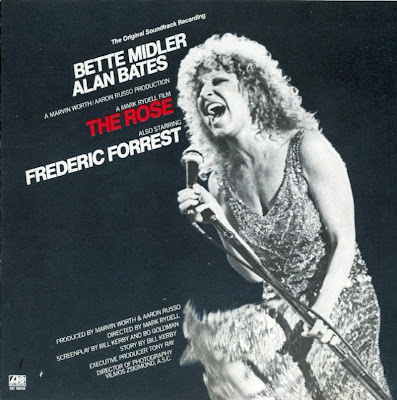 I expected sheâ€™d be good in the scenes where sheâ€™s performing on stage, but sheâ€™s exceptionally good in the intimate scenes as well.

Unafraid of revealing every intimate moment of her personality. Sheâ€™d never really acted on camera before, but with the slightest bit of encouragement, she was ready to expose it all. I found her to be a miraculous talent. Iâ€™ve only known three or four geniuses in my time, and sheâ€™s definitely one of them.

And Hollywood never knew what to do with her after that. She got an Academy Award nomination for The Rose, but they just kept putting her in these dumb comedies, and her career really disappeared. I had a couple great projects I wanted her for, but they didnâ€™t want her. They wouldnâ€™t finance them.

Iâ€™ve never seen Frederic Forrest in a better part either. He reminded me of Sam Shepard. But I thought Alan Bates seemed a little unsure of himself.

That was by choice. He was an extremely focused actor, and he loved playing that part. You didnâ€™t think his performance was successful?

What I sensed was some hesitancyâ€¦ like he wasnâ€™t sure how mean that guy was supposed to be. Like heâ€™s trying to be the good cop and the bad cop at the same time.

Exactly. But heâ€™s in control. Tough when he had to be.

His character was an invention, right? That wasnâ€™t based on Janisâ€™s manager?

No. Janis was with Albert Grossman.

And Betteâ€™s manager at that time was a guy named Aaron Russo. This bear of a guy; vulgar, crude; a nightclub manager in Chicago. The first day of shooting, we were doing that penthouse scene in New York. I started to walk over to Bette, and I feel this arm on mine. Itâ€™s this thug, and he says, â€œWhat are you doing?â€ I said, â€œI have to talk to Bette.â€ He said, â€œYou talk to me, and Iâ€™ll talk to Bette.â€ I turned to my A.D. and said, â€œMay I have the police, please? This guy is never to be on the set again.â€ I told Bette, â€œYou have two seconds to decide. He can only get you a bigger trailer; I can make you good in this movie, and I donâ€™t want him around.â€ And the cops took him away.

And the picture was another huge success. That was a great decade for you.

Thereâ€™s nothing better for a director than a financial success. They donâ€™t much give a shit out here if itâ€™s any good, so to have bothâ€”a picture thatâ€™s good, and makes a ton of moneyâ€¦ but I had a lot of success in my early career, as an actor and a director.

Now theyâ€™re kind of retiring me. Theyâ€™re more interested in those directors who can dazzle you. All the pictures I madeâ€¦ I donâ€™t think I could get any of them made today. The market is so different; theyâ€™re not interested in substantial, human dramas. Thatâ€™s what attracted me to become a director in the first place: the dramatic interaction between people. Now itâ€™s about spectacle, and explosions, and special effectsâ€”Iâ€™m waiting for people to get fed up with all that.

I just spoke with Walter Hill, and he offered a very similar assessment.

Heâ€™s a brilliant guyâ€¦ and a very good writer as well.

He thinks itâ€™s going to turn around though. That people will eventually come back to good stories.

I hope heâ€™s right… I havenâ€™t got much time left!