Billy Crystal and Bette Midler seem like two birds of a feather, so itâ€™s a surprise thatÂ Parental GuidanceÂ is their first big screen film together. The legendary duo sat down with Movie Fanatic for a chat about joining forces, singing and dancing together, and what parental guidance they received growing up. They even riff on their love-hate relationship with the tech-nifying of our society. 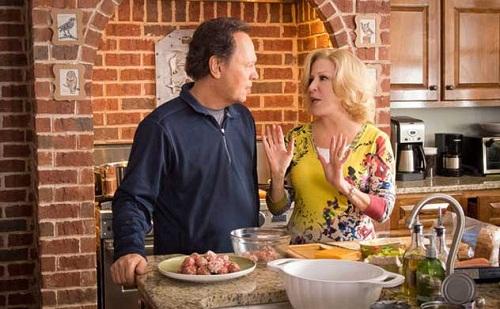 Movie Fanatic:Â As theÂ Parental GuidanceÂ trailerÂ teases, this film is about what we learn from our folks. What piece of parental advice did you get that stuck with you?

Bette Midler:Â I didnâ€™t get any guidance except be a nurse or be a teacher, donâ€™t go into show business. Those were the only jobs available to women in those days. Actresses were like tramps and all that kind of thing. My dad was very conservative.

Billy Crystal:Â My dad died when I was fifteen and he had worked a lot, way too much — so, much of my influence came from my mother. When I was about 21, just about out of college at NYU and Vietnam was raging and Iâ€™m a frustrated musician, she said you should really take clarinet lessons because if you get drafted you can play in the band and you donâ€™t have to fight. Today would be her 97th birthday. Thatâ€™s a good omen.

Movie Fanatic:Â Ahhâ€¦Tell us what it was like to finally work together, especially on that priceless singing and dancing scene when you two harmonized onÂ Book of Love?

Billy Crystal:Â Parts of the shooting we would sing for the kids to keep them occupied sometimes because they get a little bored or their mind wanders. We were in the subway in Atlanta that had great echoes. And that’s where doo-wop was born, was in high school bathrooms because the echo was good. So we just started singingÂ Charlie BrownÂ and…

Billy Crystal:Â Poison Ivy,Â Yakety Yak, those kinds of great old songs. I turned to Bette and said, “Why don’t we find a place to sing together in the movie?” And Bette didn’t want to do it right away because you were worried of being, â€œOh, it’s Bette Midler time.â€

Bette Midler:Â I thought it would break the truth of the character, what little shreds of truth there were [laughs].

Movie Fanatic:Â The house inÂ Parental GuidanceÂ is as high-tech as they come. What tech gadgets can you two not live without?

Bette Midler:Â You have to keep up and thereâ€™s new apps every day that drives you nuts. Itâ€™s a boom and a horror show. Itâ€™s the devilâ€™s playground. But, some of it is quite interesting. Iâ€™ve been doing it for a long time, but I donâ€™t use everything that’s available on a computer. Now Iâ€™m taking a class, three times a week. I sit there with all the other little ladies [laughs]. I think itâ€™s the greatest thing ever created. I donâ€™t get how it works, but the stuff it can do is incredible. Itâ€™s like we were there when the car was built. â€œYou donâ€™t have to ride a horse and donâ€™t have to stand in poop.â€ Itâ€™s unbelievable.

Billy Crystal:Â The thing about these things (pulls out his iPhone), and I just got one, as a parent and a grandparent you can get called when things happen. That is good. But, I hate seeing families in restaurants and theyâ€™re all like thisâ€¦ (looks down at his phone). They even text the waiter what they want [laughs]. They look so sad. The art of conversation is gone.

Billy Crystal:Â Itâ€™s not good for your eyes. What kills me also is people walking around town looking down at their phone assuming everyone else is going to stop and get out of the way. We have a world looking down.
Bette Midler:Â If youâ€™re in the middle of a beautiful day, why not look up and see the beauty?

Movie Fanatic:Â Lastly, having done everything imaginable, including seeingÂ Billy Crystal hosting OscarsÂ in lights nine times, your character inÂ Parental GuidanceÂ never managed to achieve his dreams. Youâ€™ve accomplished so many, including recently hosting the Oscars. Do you have any dreams that have yet to come true?

Billy Crystal:Â Not yet. Iâ€™m shocked Iâ€™ve done as many things as Iâ€™ve done. Iâ€™m so grateful for having a long career. And I hope it gets longer. I donâ€™t take anything for granted. I met somebody who I fell in love with when I was 18. Iâ€™ve been married 43 years. I have two great kids, four grandchildren and another on the way. This movie was a dream of mine to get made and we wrestled it to the ground and got it made. If I stop now, every dream Iâ€™ve ever had is great. I just keep dreaming.

Movie Fanatic:Â Well, then what is your next dream?

Billy Crystal:Â My dream is that this baby is born healthy and happy. Everything else is gravy.