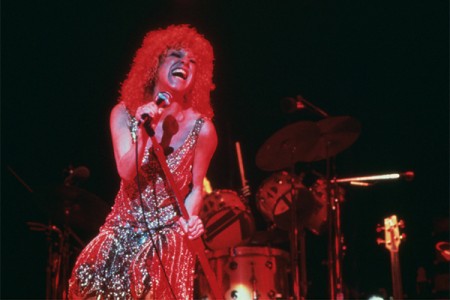 NEARLY ALL THE PRESS COVERAGE of Mark Rydell’s The Rose, the 1979 Bette Midler juggernaut, started off by mentioning that the film, about a self-destructive, monstrously talented rocker, was inspired by the too-short life of Janis Joplin–a comparison that Midler was compelled to either acknowledge or disavow when doing the publicity rounds for her debut screen performance. (Prior to Rydell’s project, she’d had a few uncredited movie roles and played the Virgin Mary in a 1971 underground film.) Yet watching The Rose for the first time, thirty-six years after its release, I was perplexed–though quite pleasantly so–to discover that the star trajectory being dramatized wasn’t so much that of the singer known as Pearl (which The Rose, in its first incarnation, was titled) but of the woman who once went by the sobriquet Bathhouse Betty.

Midler, born in 1945 in Honolulu, moved to New York in 1965, landing parts both off-off-Broadway and on it. By 1970, she was headlining at the Continental Baths, the legendary gay sauna housed in the basement of Ansonia Hotel. Her pianist at the Continental, Barry Manilow, would later serve as one of the producers of her first album, 1972’s The Divine Miss M., which reached Billboard’s Top 10, as did its follow-up, Bette Midler (1973). By the time Rydell began shooting The Rose, in the spring of 1978, Midler had released two more albums, had won a Tony and an Emmy, and had become one of Johnny Carson’s most beloved guests. In a feature on the performer that ran in the New York Times shortly after The Rose’s November 7 premiere, Midler said she had turned down roles in, among others, Nashville and Rocky. She chose The Rose–which Rydell insisted he would do only with Midler–“because it was a big film, with music, sound and lights, not an everyday picture. I don’t know if I’ll ever get a part like that again. I hope I do.”

The Rose isn’t big but enormous–a battalion of peerless shooters, including Haskell Wexler and LÃ¡szlÃ³ KovÃ¡cs, aided cinematographer Vilmos Zsigmond with the film’s many vast concert scenes–and made Midler even bigger. As for overlap with the Texas-born Joplin, the movie’s title character, nÃ©e Mary Rose Foster, also hails from a southern state, Florida, though Midler’s accent wildly roams above and below the Mason-Dixon line. Midler’s tragic heroine abuses the same substances as the real woman who dazzled at 1967’s Monterey Pop Festival and shares her same-sexing past: Rose awkwardly snogs with an ex”“lady lover who shows up unannounced backstage before Huston (Frederic Forrest), the singer’s boyfriend, walks in on them and shouts, “Why? Why?” (Midler, not sure where to put her hands or lips on scene partner Sandra McCabe, appears to be wondering the same thing.)

However much these moments line up with Joplin’s own biography, they are essentially generic flameout back story. But elevating The Rose beyond dead-icon clichÃ©s are the scenes that appear to be lifted directly from Midler’s rÃ©sumÃ©. Specifically, references to her first (and still enduring) core audience, gay men, appear throughout the film. On the night Rose meets Huston, she takes him to a club in the Meatpacking District, where a trio of drag queens–including one played by Sylvester–are headlining. After a fight, the bluesy belter chases her guy into the Luxor Baths, Midler gleefully racing past the one-time Theater District redoubt’s pools and popping into theits steam rooms of the one-time Theater District redoubt. Crucially, Midler’s actual fans populate the concert scenes: According to the Paula Meija essay that accompanies Criterion’s Blu-ray and DVD release of The Rose, the spectators for these performances, shot live at the Wiltern Theatre in Los Angeles and Veterans Memorial Stadium in Long Beach, were Bathhouse Betty’s most ardent admirers. And it is during these segments that the film’s disregard for its time frame is most glaringly, and touchingly, obvious. Rydell’s movieThe Rose is set in 1969, though Rose the title character resembles an amalgam of ’70s pop icons: Her mass of strawberry-blond curls recalls Peter Frampton’s, her flowing chiffon raiment Stevie Nicks’s. But the men–and they are almost all men–chanting “Rose! Rose! Rose!” from the bleachers are decked out not like era-appropriate hippies but Castro clones. In The Rose, it’s not’s just a star–whether Joplin or Midler–who’s made immortal, but an audience.

– Melissa Anderson
The Rose is now available on Blu-ray and DVD from Criterion.