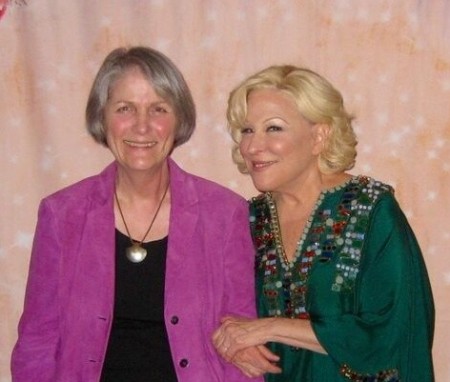 I walked over to Bette and she extended her hand and said hello.

I told her that the first time I saw her in concert was at this Arena (now SAP Center) in San Jose in 1999.

She said: “I was talking about that with someone and I don’t remember having performed here! That must have been the Millenium Tour?”

I hesitated for a second, because I drew a blank, then I said: “Yes. It was.”

I said: “You were spectacular tonight! I have met you before: I attended Hulaween twice…but now I don’t exactly remember what years (and I sort of smiled and rolled my eyes, as if it was almost too many details to remember anymore).

She nodded and gave a sly little knowing smile and said: “me either. I don’t remember either”. We both laughed at that.

Then the photographer told us to “Smile!” The rest is history.

MY RESPONSES TO THE CONCERT
I have never heard Bette in better voice. She was really amazing last night. I have seen her in concert before as you know. But the strength of her voice and its beauty was really captivating. Also there was a very personal and open feeling to the mood of the concert, bordering on poignancy, I thought, when she talked about certain things…the loss of friends during the years…and how we just have to “continue on”. She allowed herself to show vulnerability, to let her hair down and be just as much “the person” as “the performer”. Almost as if she was saying: after all these years “performing”, I want to be real and just be your friend tonight. The audience was totally taken and responded enthusiastically.