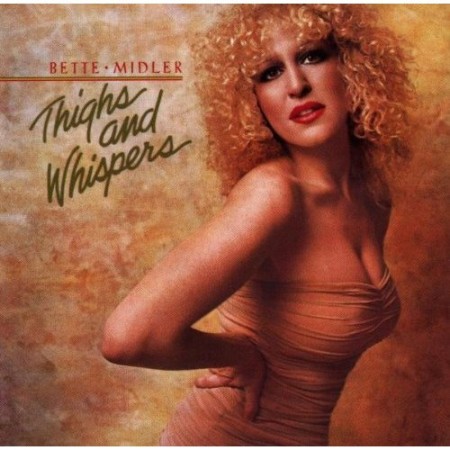 ONE reason for getting this album was to hear what this fascinating lady did with ‘Big Noise From Winnetka‘, the Gil Rodin–Bob Crosby-Bob Haggart-Ray Bauduc piece which is one â–  of the jumpingest tunes written, in my opinion; It is also a tune which is not played all that often and it struck me that it might be extemely well suited to Miss Midler’s rather distinctive style.

Those who know the tune will also know that it features whistling and the whistler on this outing is someone named Lamar Alsop.’It can also be said that it is good whistling, and whistling is an art which can be easily and sadly mangled as any ear will tell you.

The arrangement here uses two drum mers, which is probably a tribute to the early drummers who featured this piece, and I think Gene Krupa was one of the first I heard. Here the drummers are Mel Lewis, who also plays torn toms and Albert Izzo. Crusher Bennett plays congas.

Also used are Joe Caro, who is cropping up reasonably frequently these days it seems, on guitar, Arthur Jenkins on lec tric piano, Anthony Jackson on bass, Phil Bodner on clarinet and Ed Walsh on synthesizer: listed because they make a considerable contribution to a very enjoyable track.

There are background vocals, to which the lead singer also contributes/which also embellish the song.

The lyrics leap and jump as expected from recalling them and knowing how Bette Midler attacks a song. In all it is an exciting revival of a very good song. I like it immensely.

There are other tunes on the album too, just in case you were wondering. –

From the top, and allowing that ‘Big Noise’ opens, they are ‘Millworker* by James Taylor, ‘Cradle Days’ and ‘My Knight In Black Leather’ on side one ana “Hang On In There Baby‘, Midler’s own (with. Randy Kerber) ‘Hurricane’, ‘Rain’ and ‘Married Men*.

There are some fine players used, including Randy Brecker on trumpet and Michael Brecker on reeds, where Frank Wcss also blows. The music never quite grabs me as does the opener, for nostalgic reasons.

Which makes a rather patronizing comment, which it is not intended to oe.

Midler uses the language and her musical ability with often startling and, equally often, surprisingly emotional effect, especially when she gets the best of both going together.

She is always evocative and the album is aided by’ some fine arranging which manages to acknowledge that her talent is paramount and must be heard. Mind you her sheer and raw power would make it hard for even the lushest of the lush arrangers who ruin other albums to overcome her.

All in all an extremely enjoyable album, in addition to that marvelous first track.