Chicago Tribune
MIDLER OF THE ROAD BETTE STRUTS BACK OUT WITH SEQUINS AND SILLINESS
September 11, 1993 | JESSICA SEIGEL 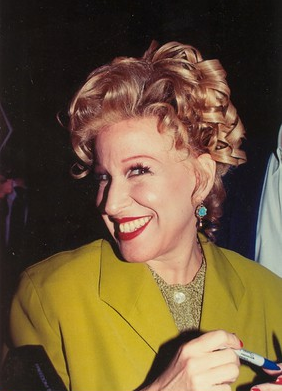 On a back lot bathed in California sunlight, the glittering trimmings of Bette Midler‘s first live tour in more than a decade beckon like a Barbie doll dream. A Barbie on the rampage, of course.

The costume rack is riveting and makes you imagine trying on the fabulous froufrou. Wouldn’t every woman (and some men) want to?

“Oh, please, I wish you would try on some,” says Midler, tickled at the notion. “That would be a great story. I want to see you fill out some of those cups.”

Few could presume to fill the cups of the Divine Miss M.

And there is hardly time or energy to try. After a full day of last-minute preparation before hitting the road, Midler shows up pooped and breathless for an interview in a plain backlot sitting room. With her outrageous stage persona left mostly in the wings, she is serious and soft-spoken as she talks about taking control of her creative life at age 47 with this return to live performance.

“It’s been really rough. It’s been hard work, very hard. We have a lot of props and clothes and attitude. It’s from scratch, you know.”

These are good, hectic times for Midler. In the decade since her last tour, she has become a wife, mother and comedic movie star, while repeating past successes as a Top 10 recording artist.

Now she’s looking back to her performance roots — the live song-and-shtick combo that made her famous more than 20 years ago at the legendary Continental Baths, a gay men’s club in Greenwich Village.

“Finally, ultimately, I want to be, I want to do, what it is that I do, not what somebody else does. That really is what drove me back on stage.”

For the past six weeks, Midler rehearsed up to 12 hours a day with the Harlettes (her three backup singers), an eight-piece band and four dancers. Much of her old creative team is back for the tour.

“I forgot how tired it gets you. I had forgotten. Now I remember why I quit the road in the first place,” she says.

After her last tour in 1982, Midler swore she’d never go on the road again. Lonely and exhausted, she once collapsed from the heat during a performance near Detroit.

At the time coming off her 1979 Oscar-nominated film debut as a Janis Joplin figure in “The Rose,” Midler bombed in her next film, appropriately named “Jinxed!”

The distress of the early 1980s began to recede in 1984 when Midler married Martin Von Hasselberg, an English-educated German described as a commodities broker and performance artist. She speaks adoringly of her husband, a gourmet cook who is now studying film directing.

Two years after their marriage, Sophie was born, a rambunctious, lively girl who sings “Diamonds Are a Girl’s Best Friend” and actually likes tofu.

As Midler’s family life blossomed in the mid-1980s, so did her movie career. Under exclusive contract with Disney, Midler became a comedic success with the 1986 and 1987 hits “Down and Out in Beverly Hills,” “Ruthless People” and “Outrageous Fortune.” But “Stella” and “Scenes From a Mall” bombed in 1990 and 1991. She was particularly disappointed by the 1991 box office failure of her pet project, “For the Boys.”

This summer, the critics praised Midler as a mugging, vamping witch in “Hocus Pocus” but panned the rest of the film. That point is not lost on Midler.

“I think I do really good work, but it doesn’t always wind up on the screen and so it’s disappointing. I’ve been disappointed a lot, and I’m tired of being disappointed,” she says, screwing up her face with disgust.

The decision to go back on stage is truly her own. The tour was timed to coincide with the release of her greatest hits album, “Experience the Divine,” which has been hovering at about No. 50 on the charts.

The tour finally came together this year, anchored by a stint at Radio City Music Hall in New York. With tickets close to sold out, the schedule was increased to an unprecedented 30-show run there from mid-September through October. After a rest, she’ll head out in November for the West Coast leg of the tour.

Though she’s somewhat less bawdy these days, Midler suggests the show will be campy as ever: “Phony grandeur, you know,” she explains. “Tongue-in-cheek grandeur. Puns and plays on words. Phony grandeur. Always phony — the screen goddess comes down to Earth to mingle with the little people. It’s very silly.”

The old favorites (“Do You Want to Dance,” “Boogie Woogie Bugle Boy“) will be mixed with new hits (“From a Distance,” “Wind Beneath My Wings“). A burlesque section with songs from “Gypsy” previews her role as Mama Rose in the CBS movie of the musical, to air in December.

Ten electric wheelchairs lined up in the back of the rehearsal hall are evidence that Midler’s aquatic alter ego, Delores De Lago, will be back with her sister mermaids.

“She’s been lonely,” Midler says. “She hasn’t worked in 10 years. She’s been in rehab. Now she’s doing her infomercial.”

With new movie projects waiting in the wings under her All Girl Productions company, Midler says for now she just hopes to get through the next few months.

“I hope nothing happens to me. I don’t want to get thrown out of my wheelchair. I’m a very pragmatic person,” she says. “I don’t have any, you know, ‘Oh, this is going to catapult me into the next stratosphere.’ Who cares? Who wants to be in any stratosphere other than this one? I’m perfectly happy. All I want to do is have some fun. Stretch some muscles. Some rusty muscles.”