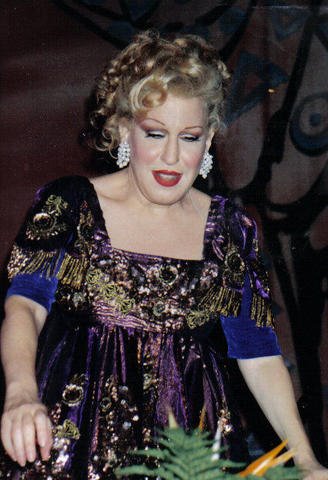 On a backlot bathed in California sunlight, the glittering guts of Bette Midler‘s first live tour in more than a decade beckon like a Barbie doll dream. A Barbie on the rampage, of course.

The chaos is enticing as the crew loads the trucks for her “Experience the Divine” tour.

A gilt-winged chair for celestial descents sits near a pile of sheet music – the score for Midler’s hit “The Rose” on top.

The costume rack is riveting and makes you imagine trying on the fabulous froufrou. Wouldn’t every woman (and some men) want to?

“Oh, please I wish you would try on some,” says Midler, tickled at the notion. “That would be a great story. I want to see you fill out some of those cups.”

That’s quite a challenge from’ the woman whose onstage deployment of her bazooms is legendary.

Few could presume to fill the cups of the Divine Miss M.

And there is hardly time or energy to try. After a full day of last-minute preparation before hitting the road, Midler shows up pooped and breathless for an interview in a plain backlot sitting room.

With her outrageous stage persona left mostly in the wings, she is serious and soft-spoken as she talks about taking control of her creative life at age 47 with this return to live performance.

Her blond hair pulled up in a 1940ish hairstyle, she wears nononsense tortoiseshell eyeglasses. A form-fitting gray tank top tucked into old jeans shows off a trim body, petite at 5 feet 1 inch.

Nestled against the arm of a couch, she dangles her flip-flops from dainty feet tipped with red nail polish.

Her manner is kindly but preoccupied, and you feel as if you’ve barged in on a harried friend on moving day.

“It’s been” really , rough. It’s been hard work, very hard. It’s very ambitious. We have a lot of props and clothes and attitude. It’s from scratch, you know,” she says, jumping up.

“No, Puddles!” she shoos her tiny Jack Russell terrier from a plate of sushi left on a low ledge. “You wouldn’t like it. It’s seaweed.”

Tending to the effusive pooch amuses Midler, who bought the dog at the insistence of her 6-year-old daughter, Sophie.

“You know how the mother always ends up taking care of the dog,” says Midler, who herself grew up in a family too poor to have one. “She’s terrific. She’s so loving. I didn’t know that’s how animals were.”

These are good, hectic times for Midler. In the decade since her last tour, she has become a wife, mother and comedic movie star, while repeating past successes as a Top 10 recording artist.

Now she’s looking to her performance roots – the live song and-shtick combo that made her famous more than 20 year ago at the legendary Continental Baths, a gay men’s club in Greenwich Village.

“Finally, ultimately, I want to be, I want to do, what it is that I do, not what somebody else does. That really is what drove me back on stage. I was just tired of working for other people (in the movies) and trying to drag them into my vision. You get tired of accommodating. I want to open my mouth and have things come out that I intend to say.”

What she wants to say includes some 30 songs never sung in public from her albums “Some People’s Lives,” “Beaches” and “For the Boys.”

“All that music I really really like and I love to sing. I really enjoy music and musicians tremendously,” says Midler, who recently began studying piano with her daughter’s teacher.

“Please don’t make it sound like I can actually play, because I can’t,” she says. “But it’s helped a lot communicating with the players.”

After her last tour in 1982, Midler swore she’d never go on the road again. Lonely and exhausted,-she ono& collapsed from the* heat-during near Detroit.

At the time coming off her 1979 Oscar-nominated film debut as a Janis Joplinesque figure in “The Rose,” Midler bombed in her next film, appropriately named “Jinxed!,” and couldn’t find work in Hollywood.

Compounding those painful memories, her longtime friend and creative partner Jerry Blatt died from AIDS several years ago, leaving her even more leery of taking on a tour.

The distress of the early 1980s began to recede in 1984 when Midler married Martin Von Hasselberg, an English-educated German described as a commodities broker and performance artist. She speaks adoringly of her husband, the gourmet cook of the house, who is now studying
film directing.

Two years after their marriage, Sophie was born, a rambunctious, lively girl who sings “Diamonds Are a Girl’s Best” Friend” and actually likes tofu. As family life blossomed in the mid-1980s, so did Midler’s movie career. Under exclusive contract with Disney, Midler became aÂ comedic success with the 1986 and 1987 hits “Down and Out in Beverly Hills,” “Ruthless People” and “Outrageous Fortune.”

This summer, the critics praised Midler as a mugging, vamping witch in “Hocus Pocus” but panned the rest of the film. That point is not lost on Midler.

“I think I do really good work, but it doesn’t always wind up on the screen and so it’s disappointing.

I’ve been disappointed a lot, and I’m tired of being disappointed,” she says, screwing up her face with disgust. Some of the movies, she said, she would not have chosen to make. “I want to do something of my own.”

The decision to go back on stage is truly Midler’s own. The tour was timed to coincide with the release of her greatest-hits album, “Experience the Divine.”

Midler also wants to see what her fans have been up to.

“I’m looking forward to seeing them again. I want to see what’s doing. I’ve lost a lot of them. A lot of my audience was gay,” she says, growing wistful from thoughts of the devastation wrought by AIDS. “It’s very sad. Very curious, the last 10 years.”