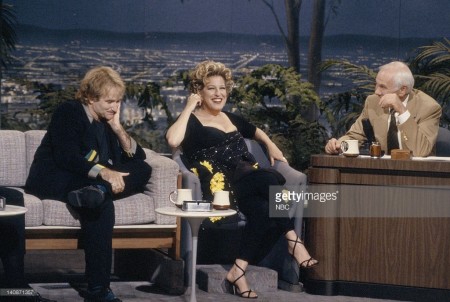 1976: Aerosmith put out Rocks. The album went gold on the same day due to advanced orders.

1977: Fleetwood Mac’s Rumors hit #1 on the charts knocking The Eagles “Hotel California” out of the top spot.

1979: Elton John became the first western act to perform behind the Iron Curtain when he played a show in Leningrad. Over 4,000 people packed the Leningrad concert hall to see the 2 Â½ hour show, some paying100 rubles (at the time $150) for black market tickets.

Elton closed the show with the Beatles “Back in the U.S.S.R.”

Checking the WZLX ticket stash: ZZ Top was at the Music Hall in 1975”¦And the Joe Perry Project played Scotch n’ Sounds in Brockton back in 1983.

One thought on “This Day In Rock History: May 21 – Bette’s The Last Guest On Johnny Carson”