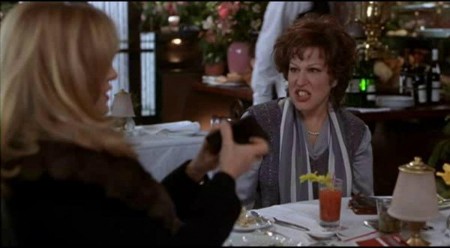 Any movie that flies in the face of conventional wisdom about what the public will pay to see is worth closer examination, and “The First Wives Club” certainly fits that bill.

The most obvious feature is that its three stars are all women and middle-age. And really middle-age, not some nebulous 40ish deal.

In fact, at least one reference lists the ages of Diane Keaton, Goldie Hawn and Bette Midler as an identical 50.

No doubt, it’s the sheer fact of gender that has helped the movie zoom past mere success into mega-hit territory. While people don’t decide to see a movie solely because they can identify with the hero, it is certainly a welcome attraction. There have been few. movies over the past year that featured even one woman center-stage, never mind three.

In fact, it’s a bit surprising more movies don’t take up the multi-women theme. While it’s not a guarantee of success, it seems more often than not such movies range from the modestly successful (“The Joy Luck Club”) to the extremely successful (“Steel Magnolias,” written by Robert Harling, “First Wives'” screenwriter).

As for the age question, the women aren’t the only middle age characters in the movie.

There are their ex-husbands, for one thing. While none of them is admirable, they aren’t all complete write-offs, and one of themÂ is actually allowed a rare, midlife opportunity to regret and redeem.

“The First Wives Club” isn’t the first movie to grapple with the age issue. Another big comedy smash this year, “The Birdcage,”Â also focused on middle age marrieds. True, one of the couples was gay, but the movie used their homosexuality not to emphasize differences but to blur them. After all, Nathan Lane’s character might have been a traditional drag performer in the movie’s nightclub sequences, but in the movie’s main set-piece, he was trying to pass as a real woman.

While this will probably grate on the teeth of other generational groups, the success of each movie looks like another baby-boomerÂ phenomenon. Hollywood began to turn its back on older audiences in the late ’60s, when it became clear that boomers were far more likely to tear themselves away from the TV and head for the movies than their elders. Now it looks as if boomers still have the movie-going habit, but those at the younger end of the demographic bulge don’t.

The studio executives’ reflexive instinct to pursue 20-somethings has led to a series of bombs that were specifically targetedÂ at Gen-Xers; call it the “Reality Bites” syndrome.

At the same time, actressÃ¨s once associated with specifically boomer phenomenons (Keaton with “Annie Hall” and “The Godfather,” Hawn with “LaughIn” and “Shampoo,” Midler with the “Divine Miss M” phase) but thought to have outlived their appeal, suddenly find themselves in a movie that’s not only a hit but setting all sorts of box-office records.

The kids are back in school, and Mom and Dad are headed for the movies. It’s a reverse of an old trend â€” school’s out, the theatersÂ are packed â€” and yet another tribute to the daunting, irresistible, and, I’m sure, somewhat exasperating, staying power of the boomers.