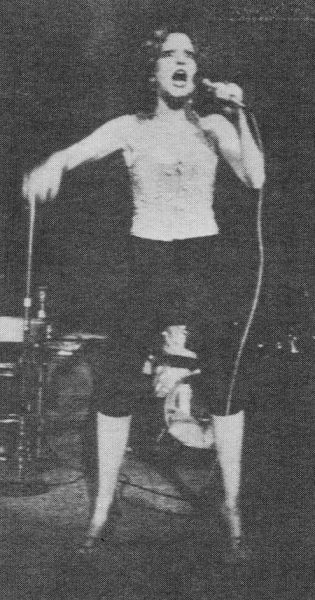 This week it s equal time for female singers, but only because they deserve it.

If vou’re not hooked on Bette Midler yet, than you are missing out on the first big star of the 70s Her debut album. The Divine Miss !M on Atlantic Records, doesn t tell the whole tale. In fact the first time through you might miss her whole appeal and just figure she is some cabaret, Vegas. Pet Clark apparition the industry dreamed up to present as THE NEXT BIG THING.

But that’s not it at all Tell you what The next chance you get go see her live < but be quick because her shows sell out in a hurry I or even catch her on Johnny Carson or Merv Griffin singing one or two songs and THEN if she doesn’t win you over you probably wouldn’t know talent if it crawled into bed with you. She has a strong voice, a sensual voice – a voice so packed with emotion that it can make you cry or laugh at will. All she wants to do is have fun> and help the audience have fun by singing to them so she pours the feeling out performance after performance.

Every song she does on the album, she does with this dynamic UNDERLYING quavering bit of emotion. In other words the tunes are well done, but it must be said that several were rather poor choices especially because of their wide variety, which would be fine in concert, butÂ fails to distinguish her style adequately on this debut disc Taking the best first, “Friends ’, written by two New York freaks Buzzy Linhart and Mark Klingman is her theme song and is superb It is so good that you welcome the fact that it appears in two slightly different takes – at the beginning and end of side two

The other highlights are “Do You Want To Dance?’’ – the old Bobby Freeman tune which is making it as a single for her – and the Leon Russell and Bonnie Bramlett “Superstar” done in a way that no other version before or after will ever be able to touch.

“ Boogie Woogie Bugle Boy” is fun and campy, but there is little of Bette as her background vocalists share and even carry the load.

“ Delta Dawn“, “ Daytime Hustler”, “Am I Blue” and John P n n e ’s * Hello in There” are good, but don’t particularly offer the vehicleÂ for her talents like the other songs and thus generate little excitement.

That leaves two golden oldies – “Chapel of Love’ and “Leader of the Pack” – which partly make it and partly don t She should have saved these two for concerts and picked a pair of lesser knowns so no one would be comparing She ought to look up more old Buzzy Linhart songs – there s a lot of good ones.

It is too bad the album doesn’t succeed as it could have and should have, but regardless it ends up being a well worthwhile purchase ifÂ you see her first and catch a glimmer of what she is trying to do and what she can do.

Let her feed a little emotion into your soul. It will do you good.