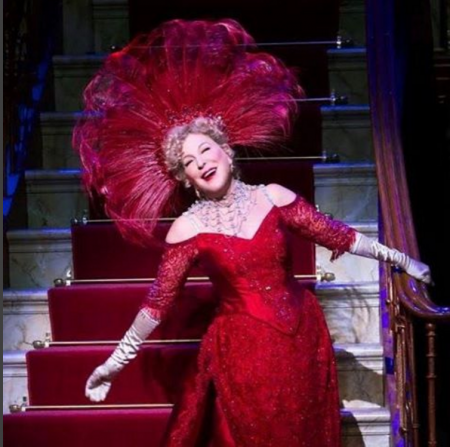 If you’re even remotely aware of Broadway, you probably know that celebrated diva Bette Midler is starring in a lush revival of “Hello, Dolly!” at the Shubert Theatre. The show has been breaking box office records left and right during previews, and just opened to rapturous praise. What you may not know is that “Dolly” has suffered diminishing returns at the Tony Awards since the original production in 1964. It’s up to the Divine Miss M to turn around the musical’s Tony fortunes.

“Hello, Dolly!” opened at the St. James Theatre on January 16th, 1964. With a score from Jerry Herman, book by Michael Stewart, and a sensational star turn from Carol Channing, the show became an instant classic. The production received 11 Tony nominations and won a then-record 10, including Best Musical and Best Actress for Channing. The only category it lost? That would be Featured Actor in a Musical for Charles Nelson Reilly. His loss started a trend. To this day, no other actor has ever won a competitive Tony for “Hello, Dolly!” besides Miss Channing.

Acclaimed songstress Pearl Bailey replaced Carol Channing in the original production, as part of an all black replacement cast. She was so well received that the Tonys gave her a special award in 1968. But when producers decided to revive the extravagant musical in 1975 with Bailey at the head, the production was skunked by the Tonys. The show ran just 42 regular performances at the Minskoff Theatre and was not cited in any categories.

Just a few years later in 1978, Dolly returned to its winning formula with Channing at the head of a new revival at the Lunt-Fontanne Theatre. Having already taken home the Tony for playing Dolly Levi, Channing was not eligible for further nominations in the role. The Tonys only recognized one of her cast mates with Eddie Bracken reaping a bid for playing Horace Vandergelder; he lost Lead Actor to John Cullum in “On the Twentieth Century.”

One more revival with Channing was staged at the Lunt-Fontanne in 1995. This production was nominated for Best Revival of a Musical, but none of its actors or designers were singled out with nominations. The show itself lost the Revival category to “The King and I” starring Donna Murphy.

If anyone could alter the Tony trajectory of this musical, it’s Midler. According to Gold Derby odds, the production is far out front to claim Revival of a Musical and Lead Actress in a Musical. According to our users, David Hyde Pierce (Horace Vandergelder), Gavin Creel (Cornelius Hackl), and Kate Baldwin (Irene Malloy) should also expect nominations in their respective categories. If they can prove history wrong they would be the first performers to win an acting category for the musical since Channing.

Luckily they have time on their side. After years of near constant revivals and a film adaptation with Barbra Streisand, the music has become anthemic for theatre lovers everywhere. Few pieces of theater are more beloved. And in an era of remakes and reboots, gems of the past become the most popular trends of today. Director Jerry Zaks and choreographer Warren Carlyle have smartly paid homage to the classic feel of original director/choreographer Gower Champion. So as long as we are talking about smashing stats and records, could Midler’s successful and nostalgia filled run of “Hello, Dolly!” even outperform the original’s Tony haul? To quote “La Cage aux Folles,” another Herman tuner, “the best of times is now.”

Be sure to make your Tony Awards predictions. Weigh in now with your picks so that Broadway insiders can see how their shows and performers are faring in our Tony odds. You can keep changing your predictions until just before nominees are announced on May 2. And join in the fierce debate over the 2017 Tony Awards taking place right now in our theater forums.