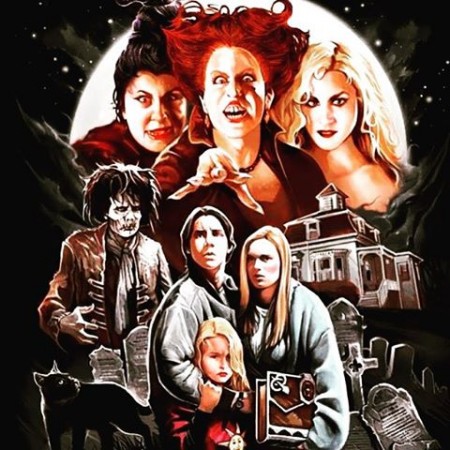 Who are these broads on brooms, the witches of Westwood? Although they look like hell – and raise it – they’ll put a spell on you.

Silly but irresistible Hocus Pocus stars Bette Midler, Sarah Jessica Parker and Kathy Najimy as 17th-century sorceresses whose spirits are raised on a modern-day Halloween night in Salem, Mass. Naturally, they think that they’ve died and gone to the devil’s playground while all around them, trick-or- treaters can’t stop admiring their way-cool costumes. (Girl, did that ratty purple velvet gown really come from your broom closet?)

What only three of those young trick-or-treaters know is that in order to ensure temporary youth, these witches plan to (literally) “suck the life” out of Salem children. Can 16-year-old Max (Omri Katz) keep his kid sister, Dani (Thora Birch), from the clutches of these greedy gals while also impressing his pretty schoolmate, Allison (Vinessa Shaw)? Perhaps, if he lets Allison and Dani – and a clever talking cat named Binx – help cream these crones.

Hocus Pocus is diverting, PG-rated fun that works on two levels. For children, it’s a Halloween adventure that suggests, yes, witches do exist but that enterprising youths can outwit them. For adults, it’s a tongue-in-cheek romp through jack-o-lantern-lit graveyards.

Forget, for the moment, the question of why Disney is releasing this seasonal feature during the summer. Also forget wondering why, despite the considerable gifts of cinematographer Hiro Narita (Never Cry Wolf), this movie – like so many Disney and Touchstone features – looks muddy, as though photographed through a jug of apple-cider sludge. (Might it be that choreographer-turned-director Kenny Ortega has a keener spatial sense than a pictorial one?)

Let’s just be happy for a family movie – essentially this summer’s Sister Act – that entertains without destroying brain cells.

The Sanderson Sisters – kind of like the Andrews Sisters in corsets and fright wigs – are the scourges of 1693 Salem. They kidnap some children and

put curses on others. One young boy, Thackery (Sean Murray), trying to save his kid sister from becoming the prime ingredient in the Sandersons’ Youth Dew formula, is turned into Binx, the enterprising black cat. When the elders hang the three sisters, the eldest, Winifred (Midler), vows they’ll be back.

Sure enough, in 1993 Salem, Max – a newcomer who thinks he’s too old to believe in “all that Halloween hocus-pocus” – takes the dare and lights an enchanted candle that brings those Sanderson gals back from the dead.

Midler’s fans might be disappointed that she doesn’t have a whole lot to do beyond puckering her kewpie-doll lips and flouncing onto her broom. But the witches have an amusing, Three-Stooges rapport, with a lot of bonking, slapping and cursing (of the witch rather than the profane variety) that make them particularly satisfying villains.

Director Ortega successfully fuses their slapstick onto a teen adventure that, by the way, encourages moody big brothers to watch out for their pesky kid sisters – and vice versa.

Parent’s guide: PG (mild profanity, sexual innuendo, may be too intense for children under 8)