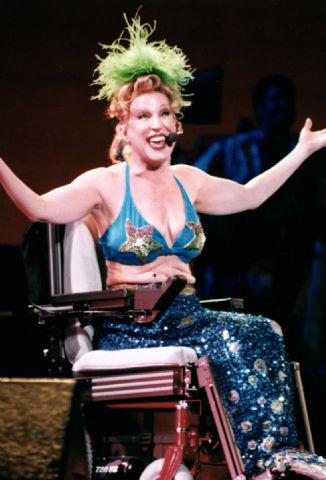 The Divine Miss M is happy happy happy, riding high on the success of her first concert tour in IO years and the recent triumph of her TV version of â€œGypsy” on CBS.

Everywhere her concert tour has sold out the houses, the fans and critics ecstatic.

Said Richard Corliss in â€œTime,” reviewing her show at Radio City Music Hall: “Bette Midler has lived up to her self-promotion. She is divine. . . The lady has earned her halo.”

She was one happy angel when she called on a recent afternoon from Kansas City, fresh from a workout, looking forward to her performance that night.

Mainly, she was overjoyed to be back where she started â€” on the concert stage, free of the studio executives whom she felt diluted herÂ talents in a movie career that has been only intermittently successful.

“For me, to sing my songs, to do my show as I choose, is just a thrill. Itâ€™s my own work, my own creation,” she said of her concertÂ show.

â€œI like the fact that itâ€™s my material, that I donâ€™t have to submit myself to other peopleâ€™s tastes, which is what you have to do inÂ Hollywood. I got so exhausted from that over the years, having ideas, and having them redefined and remanipulated until I donâ€™t even recognize my own work anymore.”

But Midler had more control in â€œGypsyâ€ the Broadway musical based on the memoirs of stripper Gypsy Rose Lee.

The production was a big ratings winner for CBS and a hit with critics as well.

â€œGypsy,â€ it seemed could open the TV screen to a new genre of special, a whole area that TV has ignored for the last 30 years or more â€” revivals of hit Broadway musicals.

â€œI hope that happens, I really do,” Midler said. â€œWe had a wonderful time making it. The material is wonderful, the book is completelyÂ ageless and classic. The songs have resided in peopleâ€™s subconscious for so long. One show does not constitute a trend, but I sure had a good time making it, and I think itâ€™s very worthwhile.”

Her concert features a performance of â€œRoseâ€™s Turn,” the most flamboyant and emotional number in â€œGypsy.”

Singing that song at her first Minneapolis show, Midler said, reminded her of how exhausting a concert could be.

â€œI came off the stage panting and sweating and practically cataÂ­tonic,” she recalled, â€œand I said, â€˜Now I remember why I stayed off the stage for so long â€™

She never worried, she said flatly, about whether she still had the chops for a full-length concert.

â€œNo, that never occured to me,” Midler said. “Why would it? Nobody does what I do.â€

Her show is eclectic as ever, ranging from tender ballads to the raunchiest routines. Yes, she performs many of the songs fans have come to expect from Bette Midler concerts, including â€œDelta Dawn,” â€œStay With Me,â€ and â€œHello In There.”

She also does the subtle melodically complex â€œSpring Can Really Hang You Up the Most.”

And yes, she again rolls out in a wheelchair as Delores DeLago, the lounge-aet mermaid.

“Delores has been in rehab,” Midler said by way of catching up on the news, â€œand sheâ€™s doing an informercial.”

Midler, who began her career as a chanteuse in New’ Yorkâ€™s gay bathhouses, still attracts a large gay following, but her audiences are by no means limited to gays.

“My crowds this year have been completely mixed â€” young, old, gay, straight. And very middlebrow, lots of middle-class types.”

She has not toned down the more scandalous part of her show, she said. In fact, the audiences seem to wait eagerly for the raunchy parts.

â€œI guess after all these years of being bombarded with all that nuttiness on TV, I look like a square,â€ she said. â€œSometimes I think Iâ€™m too straight.â€

Her risque gags, Midler said, get â€œtitters” from audiences, â€œbut they wait for the really dirty ones. These are middle-aged people, and
grandma types and grandpa types, even. Theyâ€™re just waiting for that really bad language.

“Suddenly, people want what I do. A few years ago, they werenâ€™t so sure. But in the last 20 years, so many people have gone by the wayside, there are very few entertainers doing what I do. So now I look like someone who had some sort of recognition that this was going to happen. I didnâ€™t, really. But Iâ€™m the only one left standing after all this time.”

Now 47 and married to Martin von Haselberg (a German-born businessman and performance artist), Midler is the mother of 7-year old Sophie.Â Because of Sophie, Midler is pondering whether she should go out on more concert tours. Or when.

She does not like leaving her daughter at home while sheâ€™s on the road.