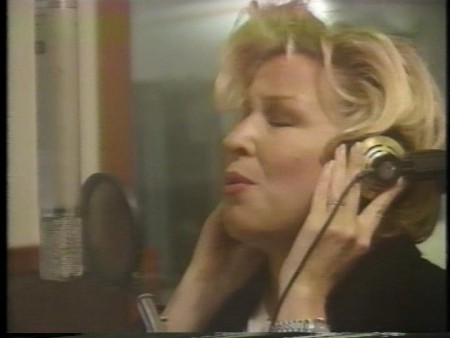 Bette Midler‘s face breaks into an incandescent grin as she considers two titles she almost chose for her new album, “Bette of Roses.”

“I toyed with the idea of calling it either ‘Mother* or ‘Mom’ ” she says, cackling mischievously. “I have this thing where people unload to me and tell me their stories, and I give them advice. I’m not sure how many lives I’ve mined, but I can’t seem to stop myself. It’s a veryÂ motherly thing to do.”

Reflecting recently on her careers as a movie star, recording artist and stage entertainer – careers that seem to play hopscotch with one another – the 49-year-old Midler slips back and forth between two personas.

One is the zany, enthusiastic and eternally childlike Miss M for whom life is a game of dressing up fabulously and acting out fantasies.

The other persona, which Midler has described as “a housewife from Queens/’ is a pop sentimentalist partial to teary-eyed ballads andÂ sudsy dramas like her most successful movie, “Beaches.” Midler’s three biggest hit records, “The Rose,” “The Wind Beneath My Wings” and “From a Distance,” have all been songs that played on this character’s heartstrings.

This more serious side dominates “Bette of Roses” (Atlantic), her first album of new material in five years and her 16th in a recording career that began in 1972. Made up entirely of contemporary pop ballads, it dispenses completely with the sort of camp nostalgia favored by the Divine Miss M.

“To Deserve You,” the first single to be released from the album, is an inspirational ballad written by Maria McKee that bursts with romantic adoration.

“And if I could trade my voice/For the silence I know that you need/How I want/How I want to deserve you,” Midler belts.

She describes the sound of her album as “mashed-potato music.”

“The songs are nonjudgmental, I’llstand-by-you types of songs,” Midler says. “They’re very upbeat, with sweet, positive messages, and the production is very soothing and comforting. In other words, Mom.”

One reason for the absence of playful novelties on the new album is Midler’s growing confidence as an emotional pop belter.

“Bette’s voice has improved tremendously,” says Arif Mardin, who has produced her last few albums. “She has a beautifully controlled two-octave range.”

Midler’s return to pop music coincides with a partial retreat from Hollywood, where she was a bankable star during much of the 1980’s. In that decade her string of hit movies included “Down and Out in Beverly Hills/’ “Ruthless People,” “Outrageous Fortune” and “Big Business” and culminated with “Beaches” in 1988.

The bubble burst three years later with the commercial failure of “For the Boys,” the big-budget World War II musical that won her an Academy Award nomination but lost money. Since then, Midler has starred in only one picture, the 1993 Disney family comedy “Hocus Pocus,” which was unsuccessful.

Although her movie career is far from over – a star vehicle directed by Martin Scorsese about the legendary New York saloonkeeper Texas Guinan is well into the planning stages – Midler’s days of putting movies above everything else have ended. In 1993 she triumphantly returned to the stage with “Experience the Divine,” her first touring show in a decade. It reminded her, she says, that playing before a live audience is her first love.

The same year, a television adaptation of the classic Broadway musical “Gypsy,” starring Midler as Mama Rose, won high ratings. And there are plans for her to star in a made-for-television revival of the 1966 Jerry Herman musical “Mame” and possibly one of Cole Porter’sÂ “Anything Goes/’ Looking back on her Hollywood years, Midler waxes alternately sweet and sour.

“I had a lot of fun at Disney for the first five pictures,” she says. “But it got to a point where they wanted to do pictures with their own stamp and didn’t want to hire outside writers. They wanted to have their own people, who worked for their prices, reporting to them.
That’s when things got dicey. And I had a big setback with For the Boys.’ Although I know privately what went wrong, I have no desire to point fingers. I was handsomely paid and did the best work I could, and people chose not to go to it. What can you do? You can’t put aÂ gun to people’s heads and force them to go to your movie.”

Since “For the Boys,” Disney has changed management Jeffrey Katzenberg left to found his own studio, DreamWorks, with Steven Spielberg andÂ David Geffen. Midler has not made any movies under Disney’s new studio head, Joe Roth.

Midler heartily concurs with the screenwriter William Goldman’s assessment of Hollywood in his book “Adventures in the Screen Trade,” in which he maintains that when it comes to making movies, nobody knows anything.

“That’s it,” she says. “It’s a complete crapshoot. Integrity? What word is that? We don’t say that word in Hollywood. We don’t know what that word means in Hollywood. But I must say, that I think Marty Scorsese knows something. When he starts talking about film, you fall madly in love with it again. Remember how you used to feel? Somehow along the way, in making all these pictures, you lose sight of that. And then he starts talking about it, and you catch fire again.”