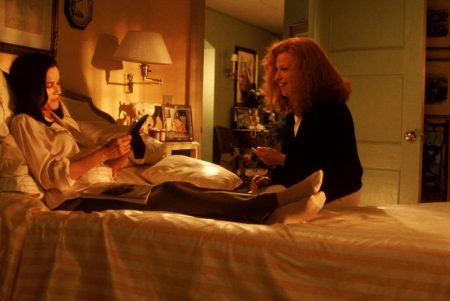 Not every chick flick has all these elements. In fact most of them just have a couple. But with that in mind, at least one of the following attributes must be present in order for a flick to be deemed “chick.”

Terminal illness – at least mom or an apple-cheeked daughter is dying – and they must get progressively beautiful as they do.

Failed romance – “There’s not a lot of mileage in a love story if all goes smoothly,” say NYU film prof Toby Miller.

Wistful disappointment – Â what could be more wistfully disappointing than “Ghost” in which Patrick Swayze comes back from the dead to romance his wife, Demi Moore, and then goes back to wherever he came from, breaking her heart a second time?

Women against the world – In “First Wive’s Club” three fifty something women discarded by callous, dirtbag husbands don’t get mad; they bond and then they get even.

10. The Way We Were – a failed romance, wistful disappointmnet – and a Barbra Streisand song,

9. Waiting To Exhale -Â Lots of failed romances, plenty ofÂ women against the world – and a Whitney Houston song doesn’t hurt either.

7. Beaches –Â  Women against the world, a terminal illness, oh and a Bette Midler song that doesn’t disappoint doesn’t hurt either.

6. Four Weddings And A Funeral –Â  Just dare a man to sit through this. Just dare him.

4. Little Women -Â Women against the world, Family focus, a failed romance or two, a near terminal illness, and a couple of cute boys thrown in for good measure.

3. Thelma And Louise -Â a ground-breaking women against the world chick flick. A classic example of the quest movie where feelings count more than resolution.