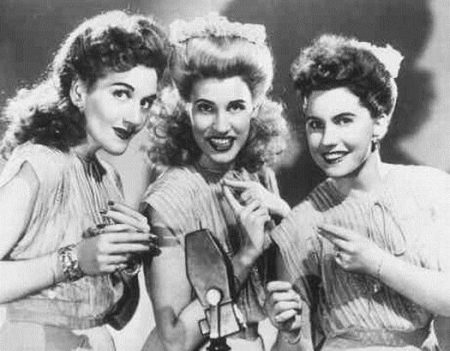 Thirty years after the peak of their singing success in the World War II era, the surviving two members of the Andrews Sisters trio are alive and working the Shubert Theater in New York City.

Patty and Maxene Andrews currently are starring in their first Broadway musical, “Over Here,” written especially for them and designed to feed the public’s current hunger for nostalgia. Amazingly, the two manage to convey the well – remembered Andrews Sisters sound despite the absence of the third sister, LaVerne, who died six years ago.

During that period Maxene was hostess to several Joplin residents at a cast party following one of the performances.

Maxene told the Joplin visitors that appearing in a Broadway show represents realization of a dream of 30 years standing for her.

For a year and a half, until shortly before rehearsals began for the show opening last March, Maxene was dean of students a small” college in Tahoe, Calif. The college folded, however.

“I liked working with students,” she said. “If the job had lasted I doubt if anything could have lured me back into show business except the chance to appear in a Broadway show.”

Maxene expects “Over Here” to enjoy a long Broadway run because of the current nationwide nostalgia craze. It features a number of new songs in the Andrews Sisters mold, and its theme is purely World War II.

Probably its most popular feature, however, is its concluding “act,” which consists of Maxene and Patty appearing on stage together to sing many of the songs which brought them ”¢ fame – “Bei Mir Bist Du Schoen,” “Pennsylvania Polka,” “Don’t Sit Under the Apple Tree,” “Drinkin’ Rum and Coca Cola” and, of course, “Boogie Woogie Bugle Boy.”

It likley was revival of the latter song by Bette Midler recently that resulted in development of “Over Here.”

Maxene acknowledges that the Midler imitation of the Andrews Sisters on the number has been a help to the sisters’ return to nationwide popularity. However, she credits Carol Burnett with providing the initial impetus.

“Carol did the same thing in her television show about a year ago, singing all the parts herself,” Maxene says. “Things kind of took off from there.”

Although Maxene, Patty and LaVerne reached a peak of success as a singing group in the 1940’s, the trio continued as an important show business attraction until LaVerne’s death.

After that, Patty and Maxene performed as a duet in clubs at Las Vegas and other entertainment spas and also worked as singles.

Now they’re .approaching a new peak of success as stars of their own Broadway show.