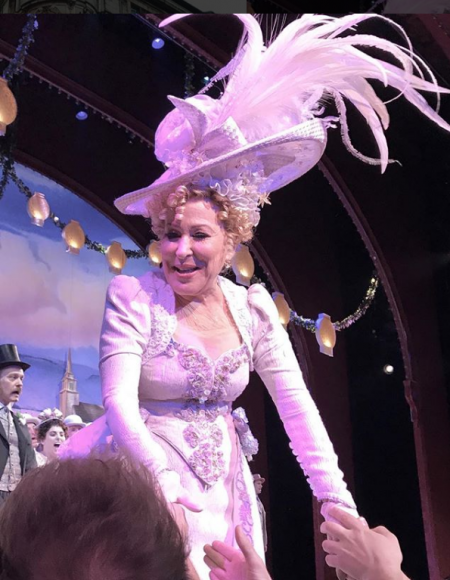 Thanksgiving is traditionally a smorgasbord on Broadway: an orgiastic feast for fans, from star-studded parades to extra performances, stuffing seats with tourists and locals alike.

This year’s festivities were no exception, with sky-high grosses across the board yielding the industry’s best turkey week ever. 31 shows on the docket collected a whopping $39.07 million. That’s 10% higher than last year’s record, and points to a truly bodacious December frame.

To precisely no one’s surprise, Hamilton led the pack, breaking its own record with an unprecedented $3.45 million – the best week for a single show in Broadway history. Come Christmas, it could be the first show to ever hit $4 million.

Not to be outdone, Bette Midler steered her flagship Hello, Dolly! to its tenth house record, taking $2.47 million with seven weeks to go before Bernadette Peters steps in. It’s splashy news, but the show has yet to recoup its capitalization, which begs the question: will Peters be able to make up the difference?

Also impressive was Dear Evan Hansen. In the tiny Music Box Theater (987 seats), the Best Musical winner grossed a record $1.95m, 42% over its listed potential. Tony Winner Ben Platt has concluded his run as the eponymous lead, but producers shrewdly timed his departure so that whatever shortfall resulted was swallowed up by the massive holiday spike. Next week will give a better sense of how actor-proof the property is.

Two other shows also broke their house records, adding to the tally. Tony winner Come From Away continued its remarkable (profitable) streak, grossing $1.53 at the Schoenfeld. And newcomer The Band’s Visit continues to make a case for indie shows in the shadow of corporate giants, as it jumped $300k from last week to gross $1.31m, the most ever in the Barrymore’s 90-year history.

Of course, several of these were already selling past their listed potential, and their records reflected holiday top-ups. (Bruce Springsteen had nowhere to go sales-wise, holding even at $2.93m). The lion’s share of new money went to the big tourist draws, not all of which are so robust year-round. Together, The Lion King, Wicked, School Of Rock, Phantom Of The Opera and Charlie And The Chocolate Factory added $3.7 million to their tally from the week prior.

(The Lion King, with $2.65m total gross, broke its own house record for an 8-show week. That a 20-year-old musical is still selling this well is nothing short of astonishing, and unprecedented in the entertainment industry. Its global cume now sits comfortably over $6.5 billion).

In fact, almost every show reaped serious post-Turkey benefits. Fully eighteen of the 31 productions grossed over $1 million. Even the smaller ones got some of the proverbial thigh, like comedy The Play That Goes Wrong, which had its best week ever at $523k. Ditto John Leguizamo’s one-man Latin History For Morons, which got a six-figure boost from last week.

Non-comedic plays didn’t see any of the holiday upswing, however. Both The Parisian Woman and M. Butterfly took huge $140k+ hits, with Junk and Time And The Conways both falling five figures each, as well. The latter two are nonprofit gigs, but it’s bad news for Butterfly, which hasn’t gained much traction since opening to mixed reviews. Parisian Woman is anchored by Uma Thurman and has been selling well so far, but could follow a similar trajectory if critics don’t bite.

Home For The Holidays, a one-off oddity that was thoroughly trashed by critics, sank even lower, taking a minuscule 3% of its potential. How it plans to stick the duration of its already-limited run is a question for the ages (and with a title that poses a true test of journalistic willpower for the snark-inclined).

Overall, the week was indicative of a truly excellent year. Thus far, the biz has grossed $818 million since the ’17-’18 season began in June, spurred by the unprecedented premium pricing for four shows: Hamilton ($849 for a prime seat), Hello, Dolly! ($748), Springsteen On Broadway ($850), and Dear Evan Hansen ($497). That’s 18% up from last season, and with Frozen and Harry Potter arriving in the spring, it’s only going to bloat further.