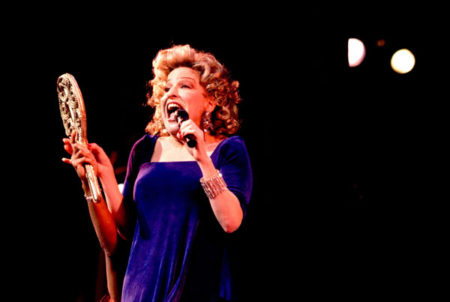 Four showgirls stride onto the Radio City Music Hall stage to play a fanfare. It is fitting that one of the strumpets with trumpets is chewing gum, for she and her sisters are introducing a supremely brassy babe. Crescendo! Curtain! Giant cotton-swab clouds! And there, radiant on a throne, sits the Arch Angel of Pop and Schlock. The message is clear: Bette Midler has lived up to her self-promotion. She is divine.

After 25 years as a singer, comedian, actress and a heavenly blend of all three, the lady has earned her halo. It may be mild hyperbole to call Midler the greatest entertainer in the universe — there are, after all, other galaxies yet to be explored — but who can doubt she’s the hardest-working woman in show biz? In New York City, where she stars until Oct. 23 in the longest stop of her first tour in a decade, Bette is poetry in perpetual motion, from her prompt entrance at 8:10 (royalty is always punctual) to her exhausted departure just before 11. She must cover about 10 miles a night in the mincing steps she takes across the Music Hall expanse. Playing the tacky chanteuse Delores DeLago in mermaid fin and motorized wheelchair, she races around like a Betty Andretti. She’ll go supine on the stage, as if it were her analyst’s couch, then busily buff the floor with her derriere. If there were windows in this grand Art Deco auditorium, she’d do them.

The ticket prices are preposterously high — $100 for a seat up front — and the evening is worth every precious penny. Say, if you will, that it’s five $20 shows in one, and count the ways. Bette the incendiary torch singer, in fine voice at 47; her ’70s classic Stay with Me is still a rhythm-and-blues catharsis. Bette the jaunty favorite of the dear departed bathhouse set, making Long Island jokes (“Hell’s little theme park”) and addressing her earlier fans: “I see we have our quorum of leather queens here tonight.” Bette the Broadway star, fronting campy production numbers and performing the stark Rose’s Turn from her forthcoming CBS revival of Gypsy. Bette the burlesque comic, delivering her Sophie Tucker jokes with a wonderfully perky diction that bleaches out the blue. Finally, Bette the nonpareil balladeer; she has now sung The Rose 4,186 times, but it and her other standards still bloom. Age has made Midler’s interpretations subtler, more mature, and her supple pipes rarely get frazzed by the punishing workout she puts them through five nights a week.

This combination of seeming spontaneity and dogged perfectionism might take its toll on a girl, or even on a middle-aged Midler. That, at least, is a running gag in the Experience the Divine tour. Who needs Andrew Lloyd Webber’s Sunset Boulevard when Bette does the aging diva right here? She tells us, in a cunning rap song, that she’s been compromised, Disneyized, classified, Jurassified. “I don’t get out much anymore,” she demurely declares, adding that mostly she sits “in my star trailer watching CNN. I know what everyone in Bosnia is wearing.” She frets that she has Oldtimer’s disease, or at least Part-timer’s (“Did I sing the ballad yet? Was it wonderful?”). She also purports to worry about sullying her “newfound stature.” When her backup trio, “the politically correct Harlettes,” starts a striptease in the home of the world-famed Christmas show, Bette goes frantic: “Girls, this is Radio City! They have a manger backstage!”

The merriment plays off an apprehension of Midler’s public, if not of the star herself, that she is in a slight career trough. A decade ago, she suffered an acrimonious flop film (Jinxed) and a nervous breakdown. She rebounded into a saner life, with a doting husband and an adored daughter, and the movie stardom that had previously eluded her. But her past three films ! have fallen this side of blockbuster. Scenes from a Mall swallowed her and Woody Allen whole; Hocus Pocus was a moderately popular summer farce; she turned down the original Sister Act script to make the epic musical For the Boys, which sank expensively, though it featured superb Bette renditions of Stuff Like That There and Every Road Leads Back to You. Perhaps she was hurt by that failure; she sings nothing from the film in her current concert. If she had an unequivocal hit in this period, it was on May 21, 1992, as Johnny Carson’s final Tonight Show guest, singing special lyrics to You Made Me Love You. This poignant spot made one think of another career for Midler: world’s sassiest, most gifted talk-show host. No one could be better than Bette at keeping viewers up all night.

Still, if one were to condemn her to a single job, it would be to do what she is doing right now. To err is Midler; to tour, divine. This star needs to be appreciated live, where her voice sounds fuller than on records, where her jokes have an easier intimacy than on TV, where she can raid the piano bench of every pop composer from Jule Styne to John Prine and make it sound completely her, where her tiny frame and infectious smile fill a huge stage. And where she looks fit and pretty. Strutting in her royal blue lounge outfit, she tells the crowd, “I bet you didn’t expect me to look quite . . . this . . . fabulous.” Somehow, we did. A unique talent in a chic package: that’s the story of, that’s the glory of Bette.