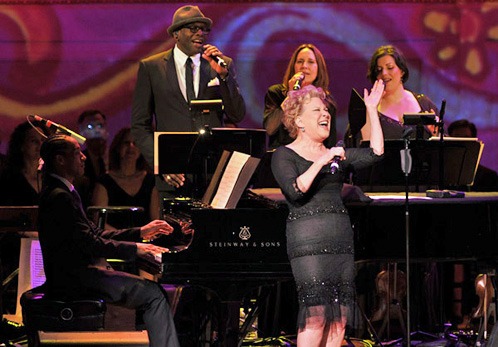 James Taylor may be the foremost contemporary composer of what you might call American lullabies. â€œCarolina in My Mind,â€ â€œSweet Baby James,â€ â€œShower the People,â€ â€œMy Traveling Star,â€ and â€œYou Can Close Your Eyes,â€ all of which he performed at a Carnegie Hall gala concert on Tuesday evening celebrating the hallâ€™s 120th year, share the same elusive magic. Along with â€œHome on the Rangeâ€ â€œRed River Valleyâ€ and Stephen Foster ballads, they seem somehow to have always existed.

Especially when Mr. Taylor sings them in a voice that is both astringent and soothing, he conjures the image of a lonely cowboy murmuring to himself by a campfire somewhere in the Appalachians. The sadness and comfort these songs evoke are two sides of the same coin. Like no-one elseâ€™s, Mr. Taylorâ€™s music distills a primal American yearning that can never be completely satisfied: the dream of home sweet home.

Because there is a ceremonial quality in everything Mr. Taylor does, the gala felt a little like an upbeat church service at which Mr. Taylor presided over his flock like a modest Protestant minister. It was the first of four thematic shows, all featuring Mr. Taylor, called â€œPerspectives.â€

A â€œRootsâ€ evening on April 20 will concentrate on music he heard while growing up. â€œGuitar Conversationsâ€ on May 6 will team him with some of his favorite guitarists. And â€œQuintessential James Taylor,â€ on May 9, will be an anthology of Mr. Taylorâ€™s best songs.

A somewhat shaky â€œThereâ€™s No Business Like Show Business,â€ a song very much off Mr. Taylorâ€™s beaten track, led off a show (directed by Scott Ellis), during which photographs of stars who have appeared in the hall were flashed onto a screen at the back of the stage. A flexible band playing musical arrangements by Charles Floyd negotiated the stylistic leaps from vaudeville to folk to rock with impressive agility.

Although Ms. Reeves performed only one number, the Billie Holiday lament, â€œDonâ€™t Explain,â€ it was a killer. Paced very slowly with minimal accompaniment, she sang as though she were dragging the weight of the world behind her.

But the eveningâ€™s most compelling performance was Ms. Cookâ€™s â€œHereâ€™s to Life.â€ To hear this indestructible woman, who is now 83, muse, â€œI had my share, I drank my fill/ And even though Iâ€™m satisfied, Iâ€™m hungry stillâ€ in a voice that has lowered without shedding any of its luster was to receive lines of personal scripture torn from the soul.

The notion of a James Taylor-Barbara Cook duet may have sounded promising in theory. But as they regaled each other with choruses of â€œNot While Iâ€™m Around,â€ from â€œSweeney Todd,â€ like son and mother, their voices didnâ€™t match.

The showâ€™s only outright failure was its attempt to cover comedy by having Kevin Pollak impersonate Lenny Bruce in an excerpt from a live recording Bruce made at Carnegie Hall. The impression was deft, but the material hasnâ€™t held up.

The appearance of Sting late in the show singing â€œPenny Laneâ€ gave the evening a sudden lift. From then on it was smooth sailing. And when the Tanglewood Festival Chorus arrived to join Mr. Taylor and Sting on â€œHow Sweet It Is (To Be Loved By You),â€ euphoria reined. Who knew, until Mr. Taylor put his stamp on it in 1975, that this Marvin Gaye standard could be transmuted so seamlessly into an upbeat folk-pop chorale?

After Bill Clinton appeared to make a pitch for the Weill Music Instituteâ€™s education programs, a second group, the Young Peopleâ€™s Chorus of New York trooped down the aisles to sing â€œShower the People,â€ and the collective joy intensified.

â€œItâ€™s what I think of as the anthem of Carnegie Hall,â€ he declared.

3 thoughts on “What Did Bette Sing? Here It Is!”