Awards & Ceremonies BetteBack For The Boys 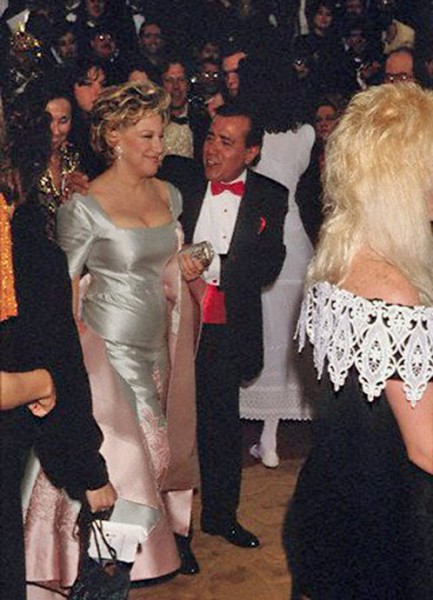 THE 64TH ANNUAL Academy Awards may have been the main event inside. But a fashion fete to rival the recent Paris collections –occasionally interrupted by gay protesters –captured the attention of onlookers all afternoon outside on the steps of the Dorothy Chandler Pavilion.

Under cloudy skies, dozens of mounted police in full riot gear moved the demonstrators across the street just moments before the limo parade began in earnest, unloading Hollywood’s elite before the Oscar arrival stands.

Suddenly It was fans shouting for “Warren … Jodie … Bette.” But when the three Oscar nominees finally sauntered up the red carpet, it was Armani, Versace and Valentino who were competing for attention.

If the contest had been for fashions, Giorgio Armani undoubtedly would have taken top honors for the third consecutive year. He continued to dominate his category: Best Designer in an Evening Performance. His togs appeared on everyone from best actress nominees Jodie Foster (stylishly outfitted in a champagne silk faille Kimono-style jacket over beaded pants) and Laura Dern (looking very grown up in a backless beaded pearl and taupe gown) to Annette Bening (in a midnight blue silk, Vneck evening gown).

He gave Midler a pale blue and pink silk gown to show off her svelte form. 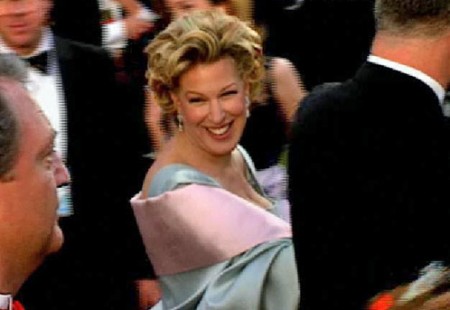 Juliette Lewis, nominated for supporting actress for Cape Fear, and Whoopi Goldberg took the fashion aspects of the awards less seriously this year. Lewis sported corn-rowed hair and a 192Qs-style thrift shdp gown; Goldberg said she got her black gown “off the
rack” at Fred Segal.

Dann Carvey, whose film Wayne’s World made him a favorite with the fans, showed up in a classic Joseph Abboud tuxedo and tousled hair.

“It’s a very British thing actually,” he joked. “It took me seven hours ” Later, the actor said all of the attention from the crowd was”helping his inner child.”

Edward James Olmos and Sally Field were among the nattiest dressers. Olmos credited Matsuda for his silk jacquard tuxedo, long coat and white silk waistcoat He said it was the perfect ensemble for an evening of benefits.

If Olmos snd Field showed how to dress well, it was perennial star-chaser Edie Williams who once again managed to demonstrate something else She showed up in a white and p?hk polyester bed dress and coordinated robe. So the crowd would be sure to see it, she made three separate trips up the red carpet.

The biggest surprise of the evening, however, was the arrival of the special effects crew from the film Backdraft who showed up on the back of a fire engine.