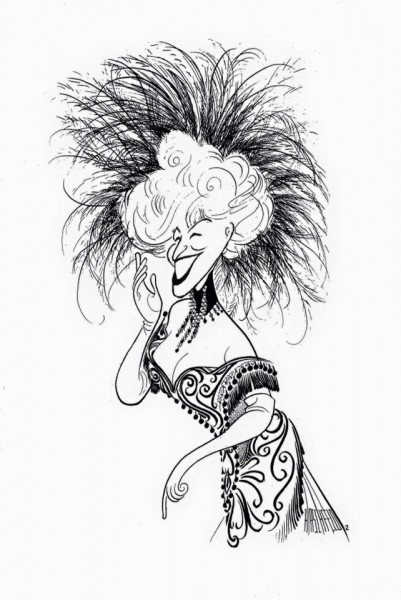 On Broadway: From Rent to Revolution is more than a picture book for your coffee table. Written by Drew Hodges, the founder of Broadway advertising agency SpotCoâ€”the place that works tirelessly to translate the meaning of a show to theatregoers looking to buy ticketsâ€”the tome takes readers through 20 years of theatre (in show posters).

â€œI wanted to show all the work that went into the final posters,â€ Hodges said at the release party for From Rent to Revolution, held just before this yearâ€™s Tony Awards. â€œPeople love the posters, and they really excite them, but they donâ€™t know all the other [versions that came before the final product]. Frankly, they are all sitting in my computer files. Theyâ€™re almost like bits floating in space, so we wanted to pull them all out and print them.â€

What exactly is the science behind creating the perfect look for a Broadway show? After all, the artwork is typically displayed on the theatreâ€™s marquee, throughout Times Square on billboards, the showâ€™s Playbill, the poster, its merchandise and more. â€œThe best thing that goes into them is figuring out what a show needs, honestly,â€ said Hodges. â€œTo figure out how a show will be perceived with almost no help. â€¦ Some shows you get, thereâ€™s a lot of priority. You could tell what youâ€™re going to get [as an audience member]. Bette Midler is going to do Hello, Dolly! You can imagine already what that show will be. In that case, the poster just needs to support what you already think, but in a lot of cases, you donâ€™t know enough, and the poster has to tell you what you might be getting. It has to make an emotional promise. It has to tell you not really whatâ€™s going to happen, but how itâ€™s going to feel to go.â€

In On Broadway: From Rent to Revolution, readers can peruse through show artwork from Rent, Chicago, Annie Get Your Gun, The Vagina Monologues, Bat Boy, Avenue Q, Doubt, The Color Purple, The Drowsy Chaperone, Breakfast at Tiffanyâ€™s, Kinky Boots, Rocky, Fun Home, In the Heights and Hamilton, among dozens of others.

Whatâ€™s the biggest challenge for Hodges and his SpotCo team? â€œBad, bad titles,â€ he says, â€œlike Drowsy Chaperone or Omnium Gatherum, where no one understands what itâ€™s going to be about.â€ Another hurdle Hodgest must clear is the desire for the poster to reflect the onstage aesthetic of the show. â€œThe shows get so caught up in the literal way the show is going to be doneâ€”the sets, the lookâ€”so they want the poster to reflect that, and thatâ€™s often not very helpful to the poster. â€¦ A better poster would be to add more information because people self-select. They decide whatâ€™s right for them, and if you do a good job, then more people have the sense that your show is going to be the one theyâ€™re going to want to see.â€

Aside from Drowsy, Hodges explained that one of the first challenges in his career was creating the perfect look for the long-running revival of Chicago.

â€œ[Gossip columnist] Cindy Adams wrote a column that said, â€˜No one is going to pay full price for a Broadway show that is just a glorified concertâ€™ because [the production of Chicago] had come from Encores!,â€ Hodges explains. â€œWe knew we had to find a way to own the really minimalistic look, so everyone would understand that that was the only way the show should look even if we had all the budget in the world, so we decided to use fashion photography because when you do thatâ€”Calvin Klein does a black-and-white fashion adâ€”nobody says, â€˜Oh, you didnâ€™t have the budget for color?â€™ That was a really early example just looking at what some of the potholes might be and trying to fill them in right from the beginning.â€

And, just when the SpotCo team thinks theyâ€™re done, the Tony Awards come at the end of the seasonâ€”and the marketing campaign switches instantaneously after nominations are announced, depending on what shows get honored.

â€œFirst of all, the whole office gets in and sits around the big table,â€ he said. â€œThis year, we had 96 Tony nominations, so the moment that theyâ€™re announced, people leap up out of the room and run off to start making their ad because they come out on Tuesday morning. The New York Times ads are due at two oâ€™clock that day, so every single show thatâ€™s in the office has to release a new ad campaign that day, and as much as you try to prefigure what itâ€™s going to be, it changes. What people thought they were going to get nominations for, they get a different one. And they get more, and they get less. So that day, almost every ad campaign changes for every show we have, so itâ€™s just a huge, overwhelming day.

â€œAfter that, everyone gets to step back and say, â€˜Who are we in the marketplace? Who are we competing against?â€™ So we spend a lot of time thinking about how to remind people the best thing they loved about your show. And thatâ€™s what itâ€™s really aboutâ€”reminding people why they liked that show.â€