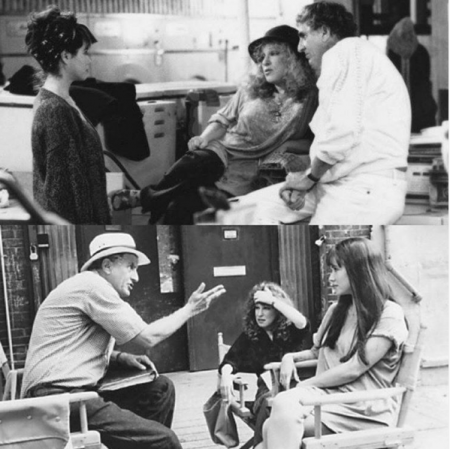 Pretty Woman is his best-known film, but Garry Marshallâ€™s Beaches reinvented the weepy for modern times. It will make you sob every time you see it.

A few years back, the 92nd Street Y in New York had the ingenious idea of having a Beaches â€œcry-along.â€

The idea was, as the title suggests, that the 92Y Downtown would screen Garry Marshallâ€™s 1988 movie for its most dedicated fans, who know that Beaches is not just a weepie, but in factâ€”even if you have a heart of stoneâ€”a film that leaves any human catatonically blubbing. Beside themselves. Wailing. Done. You donâ€™t cry tenderly at Beaches. You donâ€™t weep. You lose it.

Typically this breakdown occurs in private, whenever TCM or whoever screens it. For many, the cry-along was the first chance to blub en masse, in the safest of spaces. And we did. When a male voice, someoneâ€™s partner, presumably, piped up with a â€œHow long does this go on for? Itâ€™s shit,â€ he was so angrily rounded upon the collective hissing sounded like a bag of snakes suddenly upended.

What did Marshall, who died Tuesday at 81, do in Beaches that makes it such a good movie? Well, from the first strains of Bette Midler singing â€œUnder the Boardwalk,â€ we are indeed under the boardwalk with C.C. Bloom, already quite the little performer with an overbearing mother, Leonaâ€”and we see her joy in finding a friend in the posh Hillary. The wise-cracking showgirl and the princess form a bond.

They are two young girls from two totally different worlds, but their friendship is immediately genuine and felt, and they have their photographs taken in a booth. Pop, pop, flash, flash.

What Marshallâ€”and an all-female creative team around himâ€”does is make us believe in the notion of this friendship as epic. First, the young girls correspond via letters, as they progress from teenage-hood to the adult world beyond.

In New York, in the musky 1970s, we see the now-adult C.C. (Midler) and Hillary (Barbara Hershey) become roommates. C.C.â€™s acting career is going nowhere, so she delivers bunny-grams; and Hillary is becoming an attorney with a social conscience.

A man, always a man, proves the queering pitch: John the theater director, who falls for Hillary, but ends up marrying C.C., helping her launch her career.

Marshall and screenwriter Mary Agnes Donoghue were great at extracting the detail, the flashpoints, as the years pass by. All fans can recall the freezing cold night the women bang on the pipes to get the heat started up by their stingy landlord, or the excruciating meeting when Hillary and her posh husband come to New York to visit John and C.C., a reunion that ends in a raw, nasty confrontation between the women in a department store, and poor Hillary in crumpled tears in the worldâ€™s biggest bathroom-in-an-airplane. There is comedy, alongside all this drama, mainly down to Midler being her ribald self, until duty to Hillary calls.

Because, even after that and many years and hairstyles later, when hearts have been broken and various challenges overcome and even a baby born, Beaches has another hideous zinger to throw at us.

Hillary is freaking dyingâ€”she goes to libraries and searches on microfiches for details of her condition, viral cardiomyopathy, as Midler sings â€œI Think Itâ€™s Going to Rain Today.â€ And so another chapter begins, in which C.C. comes to take care of her friend for one last final stretch of time, despite her little missy of a daughter, Victoria, who likes her towels folded just so.

And thenâ€¦and then Bette Midler sings â€œWind Beneath My Wings,â€ and you are an unsightly, teary mess.

There is nothing good left in the world, althoughâ€”well, snuffleâ€”at least Victoria has her cat. She can have any old thing she wants.
In Beaches, the songs help push everything to its final emotional mudslideâ€”and the Beaches album is a worthwhile investment for any fanâ€”but it is Marshallâ€™s skilled direction, essentially shoving us forward through countless years and storyline flips and overacting and under-acting and storms and apples on heads, that commands the emotional heart of the film.

What is so emotional about all this? Marshall never loses sight of the filmâ€™s central theme: It is about friendship, and yes, there is a whole lot of Hollywood schmaltz piled on top of that, but the looks and glances between the women, their tone and shared experiencesâ€”I love the scene when Hillary comes back into C.C.â€™s life after her own marriage has fallen apartâ€”are brilliantly written and directed.

Midler and Hershey are the perfect odd couple who you want to be together, so that even though you have been thoroughly manipulated into every damn tear rolling down your cheek, you find those same tears do not stop until long after the credits have stopped rolling.

The 1980s bought us other modern weepiesâ€”Terms of Endearment, Steel Magnoliasâ€”but both of those range all over the place, and are determined to make us laugh before shooting us down the waterslide of despair.

Now, sisterhoodâ€”if and when it lands on our cinema screens at allâ€”comes with more treacle and irony. Beaches bypasses both, and is a more direct attack on the emotional synapses.

Yes, we the devoted cried at the Beaches cry-along that night at the 92Y. And I cried ugly, big, heaving tears when I came across Beaches again on TV a few months ago. I often wonder if I can defy crying at Beaches, if one day it will leave me cold, or my knowledge of the movie will one day inoculate me against the wave of emotion it brings time and time again.

So far, it has gotten me every time.

Thank you, Garry Marshallâ€”one of the great, empathetic directors, who knew how to make us cry with a mischievous smile; and who knew how to tap into and tweak what was in our hearts. The end of Beaches brings us another battery of pop, pop, flash, flashâ€”if you can see it through your tears.