Midler was born on Dec. 1, 1945 in Hawaii. Her mother was a seamstress and housewife and her father worked as a painter at a Navy base in Hawaii.

While studying at Radford High School in Honolulu she was voted “Most Talkative” in the 1961 school Hoss Election and “Most Dramatic” in her senior year. She went to the University of Hawaii and majored in drama, but left after three semesters.

Her first screen appearance was in the 1966 movie, “Hawaii” as an extra. She played an uncredited role of a seasick passenger named Miss David Buff. (Pictured) A still from the movie Hawaii, starring Richard Harris, Julie Andrews and Max von Sydow.

Using money from her work in the movie “Hawaii” she moved to New York City and started performing in theater. Her first professional onstage role was in Tom Eyen’s Off-Off-Broadway plays “Miss Nefertiti Regrets” and “Cinderella Revisited” in 1965. Four years later, she played the role of Tzeitel in “Fiddler on the Roof” on Broadway. (Pictured) Bette Midler and jazz great Lionel Hampton pose for photographers backstage at New York’s Broadway Theater on Dec. 22, 1979.

Her first studio album, “The Divine Miss M” was released in 1972. It reached “Billboard’s” Top 10 and went on to becoming a million-selling Platinum-certified album. “The Divine Miss M” helped Midler earn her first GrammyÂ Award for Best New Artist.

A year later, she released her self-titled second album. It, too, reached Billboard’s Top 10 and eventually sold close to a million copies in the United States alone.

In 1974, Midler received a special Tony Award for her contribution to the Broadway.

Midler gave one of her best acting performances in the 1979 movie “The Rose” in which she played a drug-addicted rock star. The role was inspired by American singer Janis Joplin and gave Midler her first Academy Award nomination for Best Actress and won her a Golden Globe for Best Actress (Comedy or Musical).

In 1983, she released the album “No Frills,” which included three singles – the ballad “All I Need to Know,” “You’re My Favorite Waste of Time,” and â€œSomeday Someway.” (Pictured) Midler signs her book “The Saga of Baby Divine” at B. Dalton Bookstore in Los Angeles, U.S. on Oct. 22, 1983.

In 1985, she performed at the fund-raising single “We Are the World,” and also participated at the Live Aid event at JFK Stadium in Philadelphia, Pennsylvania, U.S.

The next year, she was cast in “Down and Out in Beverly Hills,” that marked the beginning of a successful career in comedy movies.

In 1988, Midler starred in the movie â€œBeachesâ€ and lent her voice to the filmâ€™s soundtrack, which featured her biggest hit ever â€œWind Beneath My Wings.â€ The song spent one week at No. 1 on the Billboard Hot 100 singles chart and sold more than four million copies in the U.S. alone. It also helped Midler bag her third Grammy Award for Record of the Year. 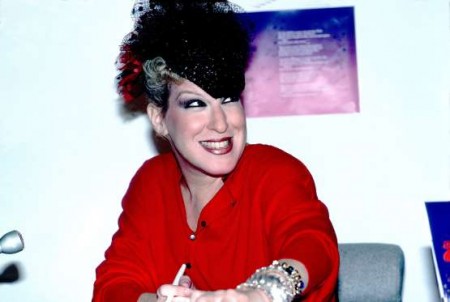 In 1990, another one of her songs “From a Distance” from the album “Some People’s Lives” topped the Billboard Adult Contemporary charts and achieved platinum status in the US.

Midler teamed up with “The Rose” directer Mark Rydell one more time for the 1991 movie “For the Boys,” a historical drama where she played a 1940s actress and singer Dixie Leonard who teams up with Eddie Sparks, a famous performer to entertain American troops. The role earned her rave reviews and she received her second Academy Award nomination for Best Actress.

In May, 1992, Midler appeared in the penultimate episode of “The Tonight Show Starring Johnny Carson.” She sang “One for My Baby (and One More for the Road)” to Johnny Carson and won an Emmy Award for her performance.

In 1993, the actress starred with Sarah Jessica Parker in the Walt Disney comedy fantasy film, “Hocus Pocus.” The film has achieved a cult status.

She won her third Emmy Award for her role in 1997 HBO special “Diva Las Vegas,” for Outstanding Performance in a Variety or Music Program.

She won her third Emmy Award for her role in 1997 HBO special “Diva Las Vegas,” for Outstanding Performance in a Variety or Music Program.

In February, 2008, Midler made her Vegas debut with the show “Bette Midler: The Showgirl Must Go On,” at The Colosseum at Caesars Palace. She was nominated for a Primetime Emmy Award for Outstanding Variety, Music or Comedy Special.

In 2012, she was awarded with Lifetime Achievement Award at the Songwriters Hall of Fame in New York in recognition of her having “captivated the world” and her “stylish presentation and unmistakable voice.”

In 2014, she released one of her highest debuting albums, It’s The Girls

In 2015, she sold out concerts in the U.S. and the U.K. with her SRO Tour, Divine Intervention!