Might I propose a new textbook definition of the term “Broadway musical?”

The new revival of Jerry Herman‘s 1964 “Hello, Dolly!” starring Bette Midler is so surpassingly beautiful, propelled by such glorious razzle-dazzle, and crafted with such joy and intelligence that it deserves to be studied, emulated and above all celebrated. Not since the 2008 revival of “South Pacific” has a classic been brought back to life with as perfect a mixture of fidelity and freshness.

This is what Broadway is all about.

And here’s what’s really remarkable: That Midler’s presence should feel like a cherry atop this delicious sundae, instead of the sole reason to dig in. “Hello, Dolly!” marks the first time the 71-year-old star is headlining a non-revue Broadway musical, and this revival has already sold upwards of $40 million worth of tickets on the strength of her brand. And, yes, to see her in this role is to witness a veteran stage performer in full command of a room — vamping, kicking up her heels and belting her heart out.

But the creative team — led by director Jerry Zaks, most recently of “A Bronx Tale” —  has crafted a complete, resplendent show, not just the flimsy framework for a star turn. The costumes (by Santo Loquasto) are a 128-count Crayola box explosion of color; the sets (also by Loquasto) manage the feat of seeming extraordinarily detailed and complex, yet never cumbersome; the orchestra, conducted by Andy Einhorn, gives Herman’s score full-bodied expression. So if Midler can’t always keep pace with the rest of the performers, and if her voice (never a particularly honeyed instrument) these days sounds a little too rough and raspy, we’re too swept up in the proceedings to care.

Jerry Zaks, the Paterson-raised son of Holocaust survivors, details his journey from a scared kid at Eastside High to directing a beloved mafia tale turned musical

Based on Thornton Wilder’s play “The Matchmaker,” “Hello, Dolly!” introduces us to Mrs. Dolly Gallagher Levi, a widow in Yonkers circa 1890, employed in various trades, including the art of matchmaking. One fateful day, Dolly decides that she’s going to let go of her memories of her late husband Levi, and make a match for herself — with the crusty and eccentric shop keeper Horace Vandergelder (David Hyde Pierce).

By the second act, this already silly plot has turned borderline cartoonish, as Dolly seeks to sabotage a potential match with Horace and the milliner Irene (Kate Baldwin), and pair off Irene with Horace’s chief clerk, Cornelius (Gavin Creel), as well as convince Horace that his niece Ermengarde (Melanie Moore) should be allowed to marry the artist Ambrose (Will Burton). Yet Zaks and Midler never lose focus on the story’s beating heart, of an aging woman reckoning with loneliness and time’s inexorable passage. The fact that Midler does sometimes seem a little unsteady on her feet in the show’s dance numbers only adds another layer of poignancy; hers is a Dolly who wavers but refuses to accept that her moment has passed. 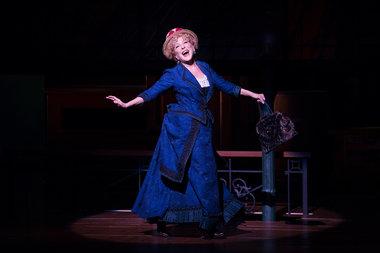 The revival of “Hello, Dolly!” has sold $40 million worth of tickets on the strength of star Bette Midler (Photo by Julieta Cervantes)Christopher Kelly | NJ Advance Media for NJ.com

Which isn’t to remotely suggest that the actress is somehow out of her depths here or not giving her all. By my count, Midler brings down the house at least three times: an achingly lovely rendition of the first act finale, “Before the Parade Passes By“; the gleeful title number (which earned a mid-show standing ovation at the performance I attended); and an almost entirely silent slapstick bit, in which Dolly keeps eating (and eating, and eating) while a courtroom waits for her testimony.

Astonishingly, Midler’s performance doesn’t suck all the oxygen at the room, a testament to both her generosity as an actor, and to the immense gifts of the rest of the cast. Like Midler, Pierce finds the humanity in a part that can too easily devolve into get-off-my-lawn schtick (see Walter Matthau in the film version). Creel and Baldwin are as beautiful to look at as they are to listen to. This “Hello, Dolly!” even finds room for Jennifer Simard (a Tony nominee for last year’s “Disaster!”) to sneak into the proceedings and nearly steal the entire show as Horace’s ill-fated, screechy-voiced dinner date Mrs. Money. (A note of praise, too, for the male chorus dancers, who perform the famed second act “Waiter’s Gallop” — choreographed here by Warren Carlyle, paying tribute to the original choreography by Gower Champion — with tirelessness and eye-popping ingenuity.)

By the end of this revival, the atmosphere in the Shubert Theatre feels like a rock concert, with 1400 or so patrons thrust into a state of sustained bliss. Tickets are already difficult to secure — and I suspect once the reviews and word-of-mouth spreads, they are only going to become more elusive and expensive — but do whatever you can to get in. This “Hello, Dolly!” turns out to be one of those iconic productions of which you’ll be proud to say: “I was there.”