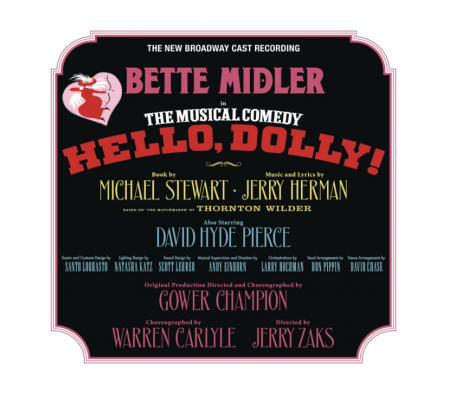 Masterworks Broadway is celebrating the release of The New Broadway Cast Recording of Hello, Dolly! starring three-time Grammy Award-winning legend Bette Midler as Dolly Gallagher Levi on vinyl. Watch the video below to get a closer look at all the features, including a 20-page book with production shots, lyrics and liner notes, cover art tributing the 1964 Broadway cast album and more!

Produced by multiple-Grammy Award winner Steven Epstein, with a cast of 37 and 28 musicians, you can order the vinyl edition now on Amazon. The recording features 16 songs, including “Penny In My Pocket,” a song restored for this production. Jerry Herman‘s Tony-winning score is heard in a new orchestration by Larry Hochman.

This production of Michael Stewart and Jerry Herman‘s Hello, Dolly! instantly became the most coveted ticket of the year when it broke the record for best first day of ticket sales in Broadway history. By the time it began previews, it had the largest pre-performance advance sale in Broadway history. In addition to Mr. Creel’s Tony Award for Best Featured Actor in a Musical, Hello, Dolly! won three other Tonys, including Best Revival of a Musical, Best Actress in a Musical (Bette Midler), and Best Costume Design of a Musical (Santo Loquasto), and has continued to break the Shubert Theatre house box office record over and over and over and over again.

This Hello, Dolly!, the first new production of the classic musical (based on Thornton Wilder‘s The Matchmaker) to appear on Broadway since it opened more than fifty years ago, pays tribute to the work of its original director/ choreographer Gower Champion, which has been hailed both then and now as one of the greatest stagings in musical theater history.