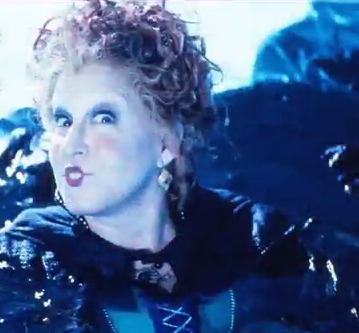 Bette Midler is more than game for a Hocus Pocus 2 and sheâ€™s urging fans to make their voices heard with Disney.

On Reddit yesterday, Midler reported that she and Hocus Pocus co-stars Sarah Jessica Parker and Kathy Najimy were game to do a sequel but itâ€™s ultimately Disneyâ€™s call.

â€œInundate the Disney company,â€ Midler said. â€œBecause I have canvassed the girls and they are wiling to do it, but we have no say in it, so if you want a Hocus Pocus 2, ask the Walt Disney company. You have been SO adorable. This has been most enlightening. SISTAHS! And don’t go chasing waterfalls…â€

In Hocus Pocus, Midler, Parker and Najimy, played the Sanderson sisters, a trio of witches who are resurrected on Halloween by a teenager, his younger sister and a classmate crush. The three kids have to stop the witches from sacrificing Salemâ€™s children in an effort to gain eternal youth through witchcraft. The film has grown a loyal cult following since its release in 1993.

Midler has also been keep busy herself. Her latest album, Itâ€™s The Girls, is available now.