Bustle
The Most Body Positive Moments From Past Golden Globe Awards
By MARLEN KOMAR
January 6, 2016

There are some awesome snippets of body positive moments from past Golden Globes that should be celebrated, mainly because awards season isn’t exactly what most of us might call an “easy ride” for women. It’s essentially a season of shapewear, scary fashion police, mean-spirited tweeters, and hours upon hours in salon chairs. It’s safe to say it’s not a time of year that likely breeds body positivity. That being said, we’ve seen a couple of champions come out of the woodwork throughout the years who have given us glimpses of self-love and a flippant attitude towards what mean commenters are waiting to say.

That is a pretty brave thing, because if you think you have issues with body positivity, just imagine how hard it would be if you actually had to walk a red carpet and put yourself out there for millions of people to analyze. Fat shaming and body snark are crazy common during and after an award show, where our favorite female stars are either applauded or skewered for their sartorial choices, dress cuts, and body silhouettes.

But just because these things are common doesn’t mean they’re right, and there have been actors who have embraced their bodies and inspired us to do the same. Whether it’s commenting on said snark or wearing whatever it was they pleased, below are seven times there was body positivity at the Golden Globes.

1. When Bette Midler Couldn’t Be Silenced About Her Boobs

When Bette Midler won her Golden Globe in 1980, she came on stage with a glorious perm and promised that she’d be tasteful during her acceptance speech, mainly because she said the academy asked her to be. But giggling her way through the speech, she couldn’t help it and bounced her boobs, going, â€œIâ€™ll show you a pair of Golden Globes.”

While the majority of us like to watch the red carpet to ooh and ahh over all the pretty designer dresses, some people take it as an opportunity to tear beautiful women down and skewer them for their choices. Enter Gabourey Sidibe at the 2014 Golden Globes, breezing through in a chic off-white gown, and getting major fat shaming backlash for doing so. Instead of taking it personally, Sidibe replied with an amazing comeback in a tweet that read, “To people making mean comments about my GG pics, I mos def cried about it on that private jet on my way to my dream job last night.”

There will always be negative people out there who will want to shame you, but Sidibe proved that it’s up to us whether we allow their comments to affect us or not. 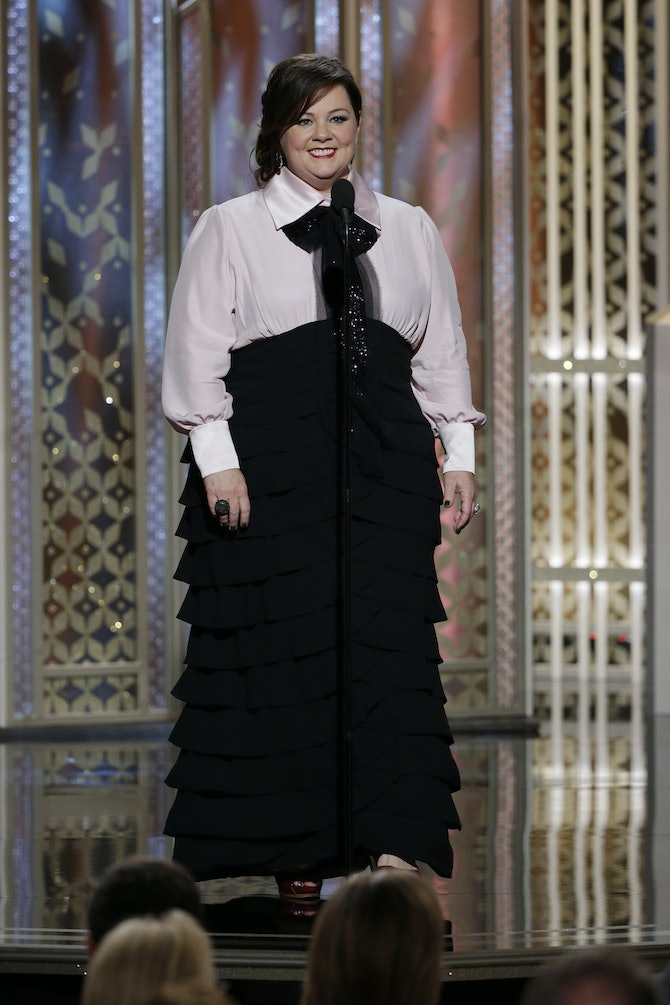 Most of us have been bombarded by the so-called fashion laws we’re meant to live by â€” ones that usually lean towards teaching us how to look our “prettiest” and svelte-iest. Besides the facts that “pretty” and “svelte” aren’t the only adjectives to strive for in this world and that beauty is subjective, those rules take all the fun out of fashion.

This is why it was so great to see Melissa McCarthy wear ruffles at the 2015 Golden Globes with a big skirt, long, puffy sleeves, and a neck tie. Plus size women so often get tips on how they shouldn’t wear big, look-at-me get-ups, and how they shouldn’t add “bulk” to their frame, but rather do their best to minimize it. McCarthy tossed those “rules” right out the window and proved she could look fly in anything. 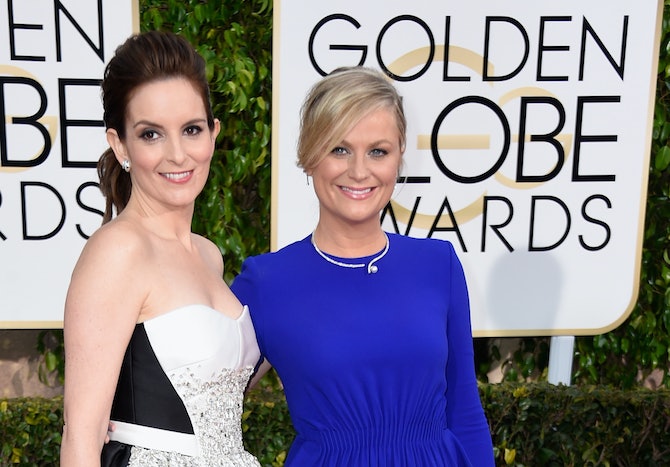 At the 2015 Golden Globes, Tina Fey took a jab at how ridiculous it is that women need to go through grueling, hour-encompassing beauty rituals in order to be considered beautiful. As Wear Your Voice Magazine reported, Fey highlighted this with a joke while hosting, saying, “Steve Carellâ€™s Foxcatcher look took two hours to put on, including hairstyling and makeup â€” just for comparison, it took me three hours today just to prepare for the role of Human Woman.”

While hilarious, this might make you stop to think about what you’re trying to cover up and change when in front of the mirror. And how maybe, instead, you should embrace and love what you have. 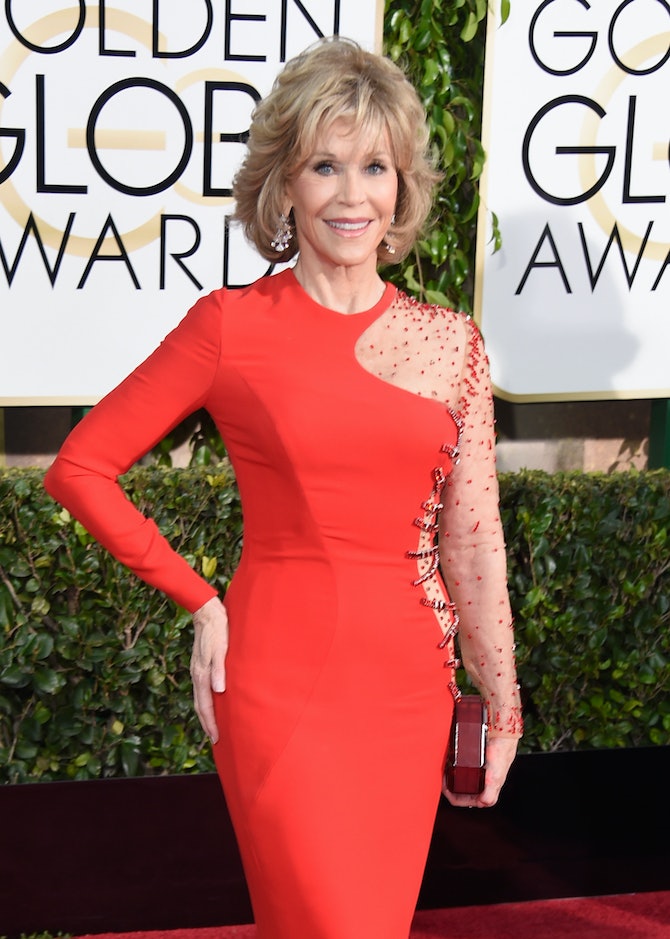 When women hit a certain age, they’re often expected to dress a certain way. Usually it errs on the side of dowdy and covered up, because once you pass 40 it’s rumored that you lose all sex appeal. Jane Fonda doesn’t subscribe to that way of thinking, though, and, at 77, she strutted her way down the red carpet of the 2015 Globes in a scarlet Versace gown with sheer inlays and a body-hugging silhouette. Some folks called the choice “daring,” but by opting to wear what a 20-year-old counterpart might just as easily choose for herself, Fonda proved she’s happy and proud of her body, no matter what ageist social beauty standards might still exist. 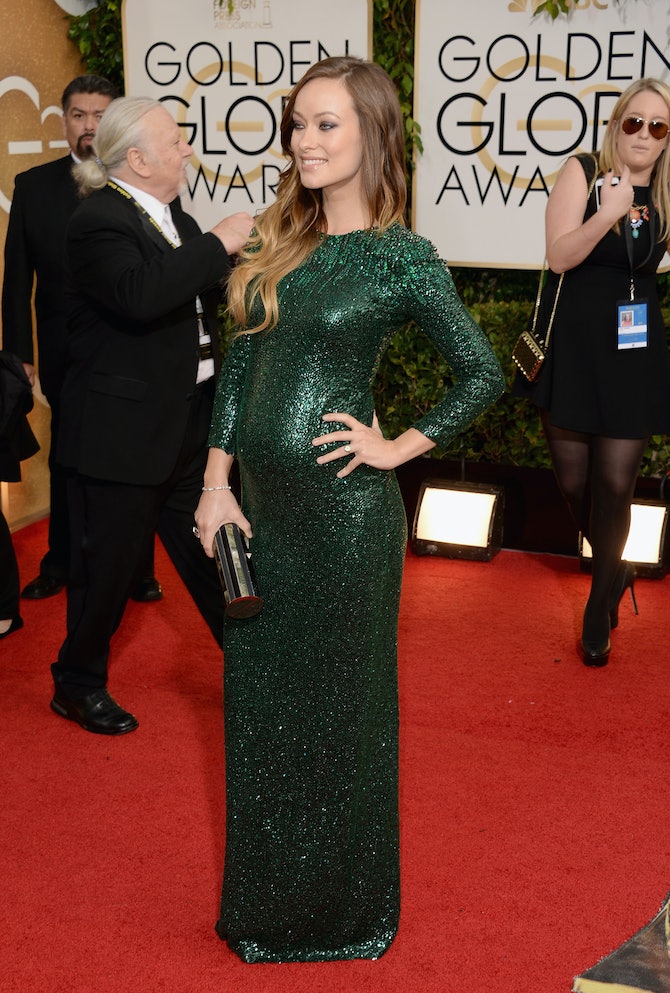 It’s not uncommon to hear phrases like “I feel like a whale” or “I’m as big as a house” when pregnant babes are discussing their bodies. But when Olivia Wilde showed up at the 2014 Golden Globes wearing a slinky, skin-tight Gucci dress that only accentuated her belly, it was a beautiful move for body positivity. Some magazines called it “daring,” but really it’s just a woman proud of what her body is doing. Why hide that?
7. Being Anti-Spanx
Rachel Murray/Getty Images Entertainment/Getty Images 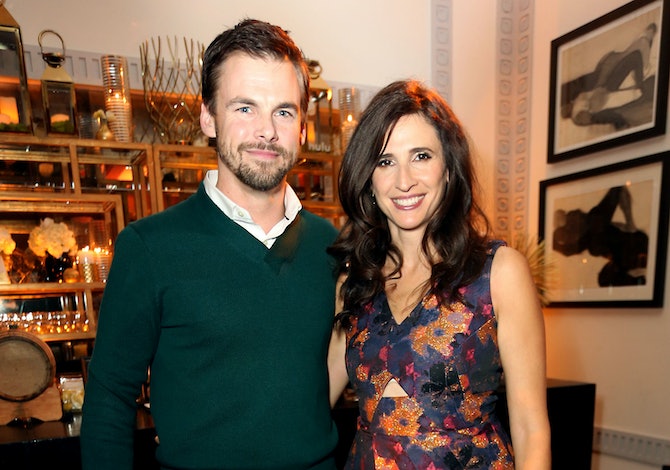 For decades, women have been made to believe they need to shimmy their way into shapewear to get their bodies evening-wear-ready. Because to be ready for a beautiful evening, you need to have a smooth silhouette, right? Forget that. For the 2016 Golden Globe awards, Michaela Watkins, star of Hulu’s Casual, told The Hollywood Reporter, “It’s going to be another way to celebrate our show on a whole new level with some really fancy people. I’m not going to wear Spanx and I’m not going to wear an uncomfortable shoe. A woman who is comfortable enough in her own body not to suffer inside of super-tight underwear for a couple of hours is one worth celebrating.

With the Golden Globes coming up on Jan. 10, let’s hope we have many more inspiring moments to add to the body positivity history list.