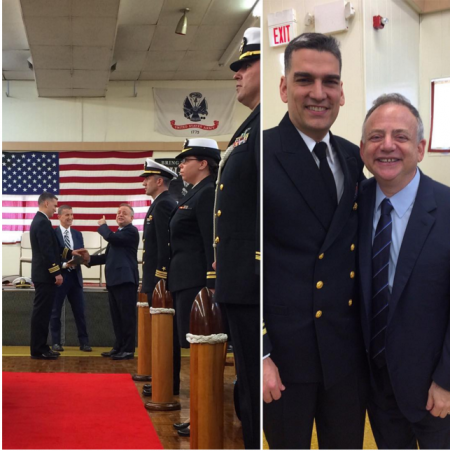 From Instagram: Incredibly honored to have spent the morning at the retirement ceremony of Lieutenant Commander Louis Mirabal (he’s the handsome one on the left). We were so surprisingly moved by the flag pass off, a slow ballet of salutes and respect, performed while Nathan Lane read Old Glory, with a backing score from American President by @marc_shaiman. There was also Patti saluting the color guard when she walked in, Bette cutting the receiving line, & Jenifer Lewis riffing out the National Anthem. I’d venture to say this VFW hall had never seen anything like it. Then at the very end of that ceremony…..@marc_shaiman & Lou had another ceremony of their own. A beautiful wedding in the middle of a beautiful ceremony.