When it comes to Halloween movies, â€œHocus Pocusâ€ is arguably one of the favorite films for millennials to watch during the spooky fall season. The 1993 movie wasnâ€™t an instant hit when it premiered, but over the years it garnered a cult following. In a nod to its everlasting longevity, itâ€™s one of the main staples in Freeformâ€™s â€œ13 Night of Halloween.â€ To make sure you donâ€™t miss â€œHocus Pocusâ€ on television this year, check out every time it will air on Freeform below: 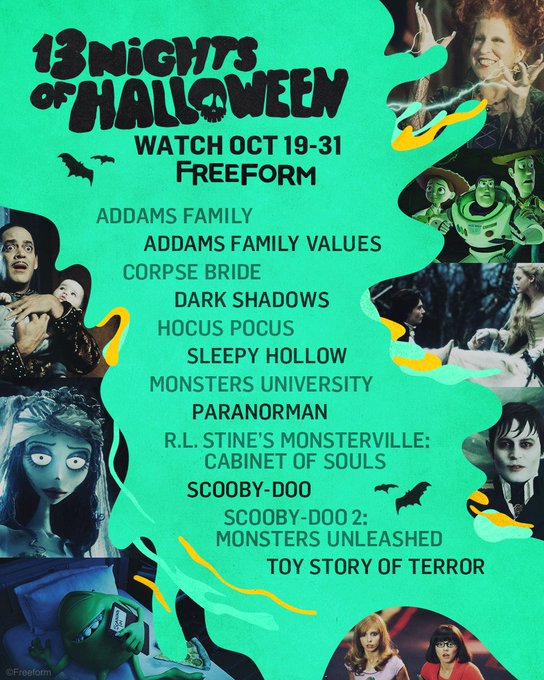 We are more than excited for #13NightsOfHalloween this year, with our SPOOK-TACULAR lineup!

Even Bette Midler, who stars as Winifred Sanders, one of the witches, loves the movie. â€œOh, I love it. I love it,â€Â Midler told journalist Katie Couric in 2013. â€œWe made it before the tidal wave of Halloween happened.â€

Midler said it was one of her favorite films. â€œKids, grown-ups, everyone takes part in it. This movie was kind of like the beginning of the wave,â€ she said in 2013,Â according to Huffington Post.Â â€œWe had a great time making it. It was Kathy Najimy, Sarah Jessica Parker and I and we laughed the whole time.â€

While there are rumors that a sequel film will film, itâ€™s unlikely. Midler joked about the gossip on Twitter last year by making a reference to the film.

â€œBreaking news!! SEQUEL DELAYED!!â€ she tweeted at the time, tagging her former co-stars Sarah Jessica Parker and Kathy Najimy. â€œ@Disney having trouble finding a virgin!â€ She also shared a gif of her and her co-stars gasping.

Najimy hopped in on the joke. â€œListen to @BetteMidler She’s got the inside scoop on virgins folks!â€ Then she added, â€œStop spreading bogus rumors @BetteMidler we both know @marcshaiman is a virgin.â€ (Marc Shaiman produced the cult classic.)