Flavorwire
Lifetime’s ‘Beaches’ is One More Remake Better Left Alone
It must be cold there in the shadow of the 1988 classic.
Film | By Lara Zarum | January 19, 2017 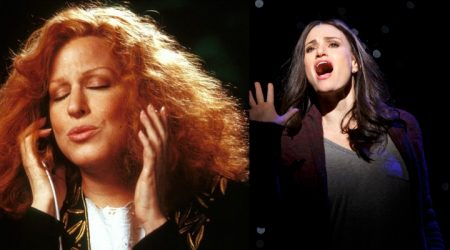 Say what you want about Beaches, but that movie is nothing if not juicy, an overripe peach oozing with the drama of a decades-long friendship between two very different women. This is, after all, the movie that gave us Bette Midler’s soaring rendition of “Wind Beneath My Wings.” So it’s doubly disappointing that Lifetime’s remake of the beloved 1988 weepy, which stars Idina Menzel and Nia Long and airs on Saturday, is so dry. Like Fox’s recent reboot of The Rocky Horror Picture Show, Lifetime’s Beaches turns out to be nostalgia-baiting waste of talent and resources, a freeze-dried remake that’ll leave you wistful for the fresh taste of the original.

Beaches begins with a glimmer of hope: A shot of best friends Cecelia “C.C.” Bloom (Menzel) and Hillary Whitney (Long) wearing opulent straw hats and drinking wine while gazing at the ocean from the porch of a beachfront house. Surely this film will provide at least an evening’s worth of entertainment for a gaggle of your favorite drinking buddies. But the movie stumbles from the word go, from the pair’s initial meeting in Atlantic City as 11-year-old girls to that final trip to the beach house, when the spunky girls have grown into complicated women — one of whom is on the verge of death. (I told you this shit was juicy.)

Or at least that’s how it went down in the original Beaches, which relied heavily on the charms of its stars, Barbara Hershey and Bette Midler (not to discount its director, Garry Marshall). Hershey played Hillary, the less colorful half of the duo, who is born into a WASP-y family and dutifully becomes a lawyer when she grows up. Midler was the original C.C. (The Big Bang Theory’s Mayim Bialik played the younger version), a carrot-topped, Broadway-bound narcissist. They’re cat and dog, yin-and-yang, oil and water, and yet they’re best friends 4 lyfe, sustaining their relationship through letters that conveniently act as exposition throughout the movie.

The letter motif is just one way the remake replicates the original Beaches wholesale while simultaneously diluting what made the 1988 movie such a lasting hit. Very little of significance is changed here, and the biggest difference — the casting of a black woman in the role of Hillary — barely registers. While the Lifetime movie shifts the main action from New York City to L.A., it filches the set design of C.C.’s scrappy Manhattan apartment, complete with its cut-out window decorated with Christmas lights, and certain scenes are lifted word for word. Others are added or removed, which results in a disjointed film that keeps randomly picking up and then dropping emotional and plot arcs.

But worst of all is the total lack of chemistry between Menzel and Long, who don’t so much come off as best friends than as two women forced to work on a Lifetime movie of which they’re slightly embarrassed and anxious to be done with. What really baffles is that these rather solid actors turn in two of the worst performances I’ve seen in ages. Despite the “opposites attract” message at the center of the film, both actors do such bland, robotic work that the characters are barely distinguishable. Long in particular is stiff as a board; she does a lot of inane giggling, and her voiceover narration is so wooden you can practically see her reading the words off a script.

The problem goes back to C.C. and Hillary’s initial meeting, which the Lifetime version truncates. In the original, those scenes of the two young girls meeting in Atlantic City — sneaking away from their parents and hiding under the boardwalk, and posing for pictures in a photo booth on the pier — neatly establish the unlikely friendship between these two, and they make a convincing case that despite the brevity of their first meeting, their relationship will last well into adulthood. You believe these two women will lean on each other throughout their lives, that they’ll give each other what they lack in themselves — a modicum of reason, in C.C.’s case, and in Hillary’s, a pop of vividness.

But Lifetime’s Beaches substitutes an assumed familiarity with the original movie for actual character development, and it’s totally devoid of any sense of place or time. Until someone mentions the locale, I didn’t even realize the movie was set in L.A. There’s practically no attempt made to adjust the actors’ appearances to account for the roughly two decades of their lives the movie encompasses, and even less effort to depict the earlier scenes as taking place in the past. From start to finish, Lifetime’s Beaches proceeds as if everything is as it always was, from C.C. and Hillary’s friendship to their hairstyles. The film lumbers forward like a nostalgia zombie mindlessly ticking off boxes — as if the concept of this remake were more important than the thing itself. And maybe it is.