Hornet
This Lego Artist Is Creating a Portrait of the Only Gay Role Model He Ever Knew Growing Up
Written by Alexander Kacala on November 2, 2017 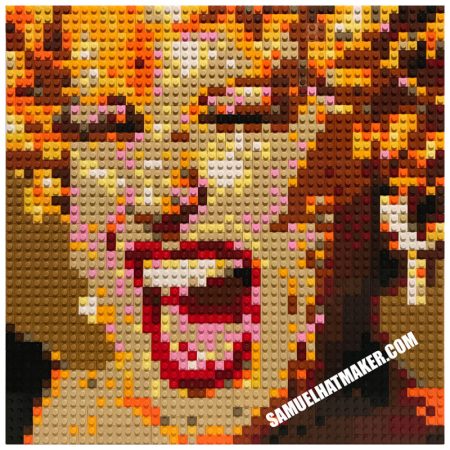 Samuel Hatmaker is a toy designer who has been molding his favorite divas into gigantic portraits made only from Legos. So far, he’s created Madonna, Wonder Woman, Bette Midler and Princess Leia, among others. His latest subject is the mother of all drag queens, RuPaul herself! Even though the Lego artist is not quite finished with his RuPaul portrait, we just had to share his progress because his work is truly gag-worthy.

Hatmaker’s Lego creations have gone viral before. Remember that Golden’s Girls set the internet went crazy for? That was his, too. Ellen DeGeneres even featured it on her show’s website, and because of the hooplah, Lego considered officially making it. Through an online vote on their website, it became the most supported set in Lego Ideas history.

A Lego fan all his life, throughout his childhood Hatmaker mostly built houses and spaceships. His recent Lego works include mini-figures, articulated characters, busts and a portrait series titled “Chicks With Bricks.”

“Chicks With Bricks” combines pop icons and Lego bricks, two major influences on the life of the out artist. RuPaul was especially influential on him, as he didn’t have any other gay role models to look to.

“As a gay kid from a small rural town, I had no gay role models to look up to,” he explains to us. “When RuPaul’s ‘Supermodel’ came out, I fell in love. She was the first gay icon, out and proud.”

“Before Ellen DeGeneres or Will & Grace, RuPaul gave me life and hope,” he says. “I bought every album, read Letting It All Hang Out [RuPaul’s first book], watched The RuPaul Show on VH1 and became obsessed with everything Ru. As time when on, Ru became a cultural touchstone, who could read people when needed, but lived and preached a more loving and compassionate message of love. Love yourself, love others and know that love can change the world if we want it to.”