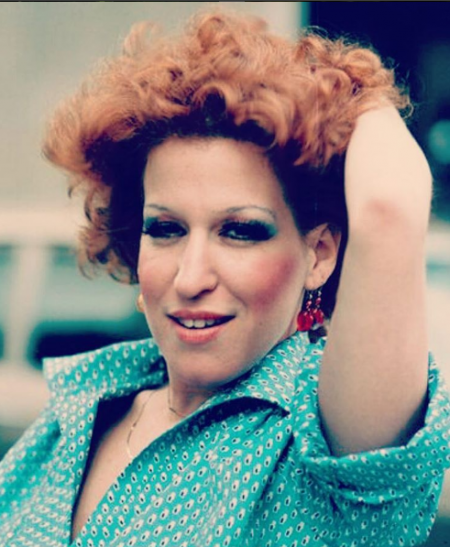 In this crazy rock ‘n roll world where superstars streak into prominence with the alacrity of unnatural phenomena and instantly develop a cult following that worships with unquestioning fervor, Bette Midler is being acclaimed the High Priestess of Camp.

She makes the kookiness of early career Barbra Streisand look pristine, the grossness and vulgarity of Belle Earth and Sophie Tucker seem tame and the frenzied on-stage antics of Janis Joplin and Jerry Lewis appear understated. It was only her third appearance in the Bay Area and her four night stint at Berkeley Community Theater was a solid sellout.

I can’t remember when I’ve seen such a charged up performance. It’s almost too much to bear. Words like dynamic and electric don’t adequately describe the possessed emotional pitch with which this pint sized redhead from Hawaii (she looks a little like Harpo Marx with carrot colored fuzzed up mop of hair) screams and rants through a two-hour show. It’s not as bizarre as some pop star acts but funky, blue,
low down and marvelously campy.

She’s singer, actress, impersonator and personality plus, not giving a damn whether she finishes a story or a song, shouting out the most outrageous things to turn on her well stoned audience and lavishing the adulation she gets with every one of the dozen or more standing ovations throughout the evening.

The more they respond, the wilder she gets.

Her repartee is as bawdy as her repertoire which ranges from songs of the thirties, forties, fifties and sixties. She describes her act as “gaar-baghe” and introduces her female trio. The Harlettes as “three trashy waitresses from Encino” … and plays it up to the hilt.

Her trio poses and postures in the style of the Andrew Sisters, hands on hips, heads turned snobbishly in an upward tilt, bumping and grinding in unison, sometimes shoving each other away from the microphone.

They change into pink sequin gingham maid’s uniforms (complete with sequin caps) that first jerk open to form a dazzling red, white and blue sequin American flag and later rip off to reveal them in sexy satin underslips edged in black lace and bearing a sequin playing card emblem. You’ll have to admit, that’s going some to create a surprise effect, which is what happens every five minutes of the raucous, madhouse of a show.

Nothing is sacred on The Divine Miss M‘s lips.

Her description of what “Hubba Hubba” means can’t be printed here, she titles one segment her Philadelphia medley because “it reeks,” and claims to be on an exhausting 272 days tour, “Martha Raye would give her eye teeth and a box of poppers for a tour like ours.”

She caters mainly to the gay crowd with “in references” only they seem to get like “I just love those sleezy bars where they play Wayne Newton on the juke box” and after announcing she’ll sing one of Karen Carpenter’s “greatest hits” says something a teensy bit filthy about her drum playing. By the time the show has ended, she’s involved the audiÂ«hce in a sing-a-long, insulted almost everyone, forgotten the
words to a song, joked with the musicians with her back to the audience, flung herself across the stage in leaps and bounds, shaking every moveable part of her body, blown your ear drums out in Janis Joplin-like flamboyance with a vocal of the Glenn Miller hit, “In the Mood.” the rock ‘n roll orgy “Leader of the Pack,” dropping into deep knee bends in simulation of a motorcycle rider, raised the roof of the theater on “Higher and Higher,” and flattened her over-wrought audience with a stunning and poignant rendition of “Am I Blue.”