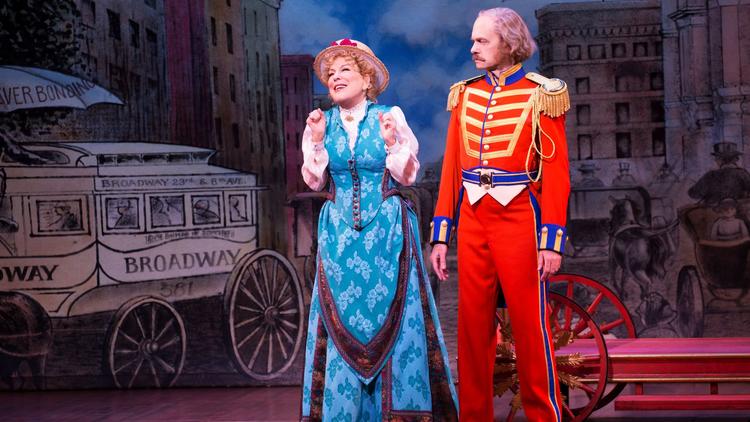 Rarely has an exclamation point in a title been earned as thoroughly as the one in the new Broadway revival of “Hello, Dolly!” starring Bette Midler.

The show, which opened at the Sam S. Shubert Theatre on Thursday, offers the special satisfaction of a favorite star finally performing the role she was destined to play. But this is so much more than a Divine Miss M vehicle.

The blissful production, directed by Jerry Zaks, operates under the principle that golden age musicals should keep intensifying the pleasure of the audience until a state of euphoria is achieved. Standing ovations are de rigueur on Broadway these days, but theatergoers are clearly having difficulty containing their joy when they repeatedly stand and cheer throughout the show.

I was surprised myself at what a great time I was having. I should acknowledge that though this revival is the season’s most coveted ticket, I wasn’t champing at the bit for another “Hello, Dolly!” I know Michael Stewart and Jerry Herman’s 1964 classic mostly from watching the film on TV as a kid and wondering what I was missing. A recent viewing, an experience I compared to doing stomach crunches while stuffing envelopes, hasn’t changed my opinion. Barbra Streisand has some delectable moments, but she was too young to play matchmaker Dolly Levi, Walter Matthau looks miserable and the film plods dutifully through farcical scenes that can’t fully come to life on-screen.

Zaks’ production never lets us forget that we’re inside a theater. The stage is festooned with lights. Illustrated drops merrily set the scene as the musical moves between New York, where hustling Dolly plies her countless trades, and Yonkers, where the “well-known unmarried half-a-millionaire” Horace Vandergelder (expertly played by David Hyde Pierce) tyrannically presides over his hay and feed store.

Stewart’s book is adapted from Thornton Wilder’s play “The Matchmaker,” which is itself derived from other farcical properties. The musical tale, revolving around Dolly’s scheme of marrying the cantankerous but comfortable Mr. Vandergelder herself, revels in its own time-tested silliness.

Zaks openly embraces the zaniness. Mr. Vandergelder’s employees, Cornelius (the dashing Gavin Creel) and Barnaby (a humorously awkward Taylor Trensch) hide in plain sight from their boss in the New York hat shop owned by Irene Molloy (charming Kate Baldwin), Mr. Vandergelder’s intended whom Cornelius has instantly fallen for. After things grow a little too wild at the posh Harmonia Gardens restaurant, a table is relocated to a courtroom, where Dolly devours the meat off a bone and sips directly from a gravy boat before defending her locked up friends to the judge. The geography is completely logical in this Broadway universe.

Whatever the theatrical equivalent of Technicolor might be, Santo Loquasto has discovered it in his sets and costumes. The pastel hues of the Sunday finery of frolicking passersby are like a sherbet medley. The almost obscene red of the stage curtain is matched by the harlot scarlet of the dress Dolly wears when she sashays down the Harmonia Gardens stairs in the show’s grand title number.

The choreography by Warren Carlyle helps to preserve all that made Gower Champion’s original staging so legendary. The fertility of imagination on display, the way trains and trolleys, dinner plates and canned goods, tuxedos and feathered hats become momentary dance partners, is breathtaking. It’s not just the cast members themselves but the entire production that springs to animation when the music plays. (Music director and conductor Andy Einhorn draws out the luscious ebullience of Herman’s indelible score.)

At the center of the swirl is Midler, who seems to be basking in the pleasures of this crowd-pleasing show. She acknowledged her entrance applause with a pat to her heart, as Dolly herself might do when greeted with cheers on the street by those happy couples she united. Dolly’s irrepressible theatricality allows Midler to do what she does best — put an audience under her modern vaudevillian spell.

Midler wasn’t in the best voice during the reviewed performance. When she sang “Before the Parade Passes By,” she proceeded gingerly down a surprisingly narrow vocal passageway. A touch of hoarseness may have diminished her range, but it didn’t interfere with her ability to communicate the emotional truth of the song, in which this widow exhorts herself to get back into the game of life before it is too late.

Carol Channing, who won a Tony for her celebrated performance as Dolly, was still doing Broadway revivals in her 70s. Star power and comic timing, two things age can’t touch, are the essential ingredients for success with this character. Midler infuses a little of her Sophie Tucker impression in her walk and wisecracks. She fast-talked and shimmied and trusted that the show would keep her aloft even when she may have occasionally doubted her song and dance prowess.

As for the eagerly awaited “Hello, Dolly!” number, Midler was up for the belting, but it was the thrill of the character making her splashy entrance that entertained us most. It’s an exhausting dance routine, and Midler doubled-over in exaggerated fatigue before running through one final round of the song. She had us in the palm of her hand from start to finish.

Half the fun of seeing Midler and Pierce face off as Dolly and Mr. Vandergelder comes from watching two pros at the top of their game. An electric current of comic ingenuity runs between them. Marriage in this case promises more than a financially secure future for Dolly and a pragmatic housekeeper for Mr. Vandergelder. It guarantees a companionship of laughter.

The diversity of the supporting cast’s strengths is a marvel. As Cornelius and Irene, the romantically appealing if unexpected lovebirds, Creel and Baldwin provide majestic singing. As bashful Barnaby and bold Minnie Fay (the clerk at Irene’s store who isn’t shy about signaling her interest), Trensch and Beanie Feldstein bring delightful eccentricity to their sidekick roles. Even the dazzling chorus dancers possess striking individuality — there’s nothing at all cookie-cutter about Zaks’ production.

When Midler delivers Dolly’s moral at the end (“Money, pardon the expression, is like manure. It’s not worth a thing unless it’s spread around, encouraging young things to grow”), she makes sure we don’t miss the contemporary relevance. But more than anything, this revival of “Hello, Dolly!” is an antidote to this age of anxiety. The show distills the mood-elevating properties of the American musical at its giddy best.

Midler will no doubt be crowned with laurels for her performance. But she’s winning something even more satisfying — the hearts of Broadway theatergoers, one of whom left the Shubert singing, “Bette, don’t you ever go away again.”