New York Times
Kim Kardashian, Her Selfie and What It Means for Young Fans
By KATIE ROGERSMARCH 14, 2016 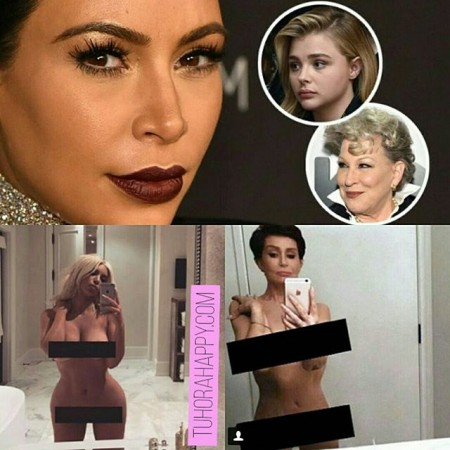 It would seem that for someone like Kim Kardashian West – queen of selfies, breaker of Internets, mother of two – sharing a nearly nude selfie with millions of followers on social media is a pretty ho-hum weekday activity.

But her latest racy photo, published last week on Twitter with a mundane caption (“When you’re like I have nothing to wear LOL”), quickly drew a mix of young, powerful celebrities into a debate over whether sharing such an image is a symbol of sexual empowerment, or an example of a powerful woman selling herself short.

In a climate where the harassment and bullying of young women online has reached alarming levels, experts say the encouragement of freedom of healthy sexual expression among women is increasingly necessary. But, they say, so is discussion about what, exactly, constitutes empowerment, and why.

Though Ms. Kardashian West could share a revealing nude photo and be praised (and even paid) for her efforts, her legions of young fans might be exploited, harassed or shamed if they try the same thing. Nor do they have valuable brands to burnish. Even Ms. Kardashian West is not totally protected: In addition to receiving thousands of messages that call her “queen” and “mom,” she faces a regular onslaught of abusive messages.

“When Kim does things like this, she’s ”˜working,’ ” Pamela Rutledge, director of the Media Psychology Research Center, said, adding, “Young people need to understand that her celebrity comes from being out of the ordinary, but that is only sustainable by continuing to push the envelope.”

Ms. Kardashian West’s mastery of social media marketing was underscored by the debut of her Snapchat account – a new platform and a new revenue source – even as she dressed down critics like Bette Midler.

She drew support from other celebrity women who saw the criticism as an affront to self expression. “Anybody who tries to say how a woman chooses to display their own body is wrong, is severely misinformed and misguided,” the actress Abigail Breslin, 19, wrote on Twitter.

Another 19-year-old actress, ChloÃ« Grace Moretz, was met with accusations of body shaming when she expressed a differing opinion: “I truly hope you realize how important setting goals are for young women, teaching them we have so much more to offer than just our bodies,” Ms. Moretz said in a message to Ms. Kardashian West.

Ms. Kardashian West, who is 35, replied: “Let’s all welcome @ChloeGMoretz to twitter, since no one knows who she is.” She also referred to a Nylon magazine cover in which Ms. Moretz appeared partially nude.

As the famous women debated in public, the narrative began to shift from “why did she” to “why can’t she”? Ms. Kardashian West can, and she has, and she’ll probably do it again, all the way to the bank: She interrupted the debate to say her video game made $80 million.

Though she might flaunt her wealth and power on social media, the underlying issue, she wants the world to know, is that she is tired of being shamed for a 2003 sex tape that made her famous.

“I will not live my life dictated by the issues you have with my sexuality. You be you and let me be me,” she wrote in an essay on her personal app ($2.99 a month.)

Ms. Kardashian West has learned to harness past harassment into a moneymaking machine, and therefore control her image. She is both sexually empowered and, as she would say, liberated. Young women without the same access to power echo that behavior when their photos fall into the wrong hands, according to the author Nancy Jo Sales, who wrote “American Girls: Social Media and the Secret Lives of Teenagers.”

“It’s this kind of weird kind of feminism by defense,” Ms. Sales said, adding that many girls react by saying, “”˜Well go ahead, I’ve already been exploited.’”

Part of a chapter in Ms. Sales’s book, for which she interviewed over 200 young women, ages 13 to 19, is devoted to how these girls feel about Ms. Kardashian West, who is an idol for many. (“You’ve inspired me to be hot and famous,” one of them says to her at a book signing.)

Ms. Kardashian West’s fan base (41 million on Twitter alone) is devoted, and mobilized to support her in the face of criticism. While thousands were amused by Ms. Kardashian West’s exchange with the 19-year-old Ms. Moretz, Ms. Sales said that this interaction highlighted a frequent problem girls face: If they question the sexual status quo, they are often told their opinions are invalid.

“There are a lot of ways you can respond to a teenage girl,” Ms. Sales said, “other than tell her that she simply doesn’t matter.”

The pressure on girls to “send nudes” – a request that can be sent in a Valentine’s Day-style candy heart on Ms. Kardashian West’s custom mobile keyboard app (also $2.99) – is so constant, Ms. Sales said, that sometimes the pressure to send a photo can turn into outright threats.

“For Kim it translates into money,” Ms. Sales said. “That’s not the case when you’re a middle schooler growing up in some little town somewhere where everybody knows you and can see that picture.”

2 thoughts on “Kim Kardashian, Her Selfie and What It Means for Young Fans – Is It Really Feminism?”